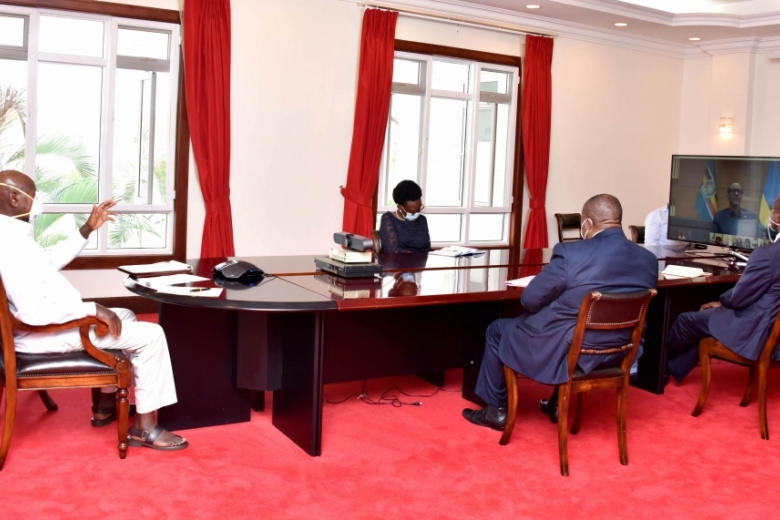 President Yoweri Museveni has emphasized the need to discuss in detail the testing of truck drivers and suggested that joint medical teams test the drivers from where they start their journeys and at designated stops.

The President was today speaking via video conference with the EAC heads of State including the EAC Chairman President Paul Kagame of Rwanda, President Uhuru Muigai Kenyatta of Kenya and President Salva Kiir Mayardit of South Sudan. The one-hour meeting that was attended by the Minister of Health Dr. Jane Ruth Aceng and Minister of East African Community Affairs Maj. Gen (Rtd.) Kahinda Otafiire, was dominated by the issue of truck drivers and importation of COVID-19 cases, trade and a joint regional response to the pandemic.

President Museveni briefed the meeting that Uganda now has 122 cases, recovered 55 and no deaths.

President Paul Kagame of Rwanda who is also the current Chair of the East African Community described this as ‘undoubtedly a difficult period’.

“We are working to minimize economic hardships on our citizens and protecting their health. This will be more effective as has been stated by Excellences’, if we act in concert with one another. To combat this COVID-19, it is important to maintain the flow of trade within the region, working hand in hand with the private sector. This is the key principle I wish to emphasize today. So long as any of our members is vulnerable, we are all at risk. Therefore we must work closely together in the months ahead to face this challenge as a community of partners,” he said.

Giving an update of the COVID-19 cases, President Kagame said in Rwanda they now have 285 cases, 150 have recovered, 135 still undergoing treatment in isolation centers.

“We also have a similar problem of truck drivers. We are very much interested in working with region to see how we can effectively manage that problem,” he said.

President Uhuru Kenyatta of Kenya said in order to limit number of vehicles and human movement, they have discussed with President Museveni a proposal to intensify efforts to move more cargo by train and across Lake Victoria.

“Kenya already moved its pipeline to Kisumu and every three days 900,000 litres of clean fuel goes across the Lake. It is cheaper, faster, more reliable and less need for too many people being involved. It also eliminates about 40 – 50 trucks from road,” he said.

President Uhuru also said in an effort to reduce the journey, Kenya will make available the inland port of Naivasha for all transit cargo. He said this will reduce the travel time and possible incidences by half by allowing Uganda, Rwanda, South Sudan and DR Congo to avail their customs and health officials at Naivasha to clear their goods from there.

“Unless we work together, we are not going to be able to solve this problem because our borders are porous, our people are one and therefore we must have a common position if we are to defeat this virus,” Uhuru Kenyata said.

President Uhuru gave Kenya update on status with 621 cases out of which had 29 deaths and 202 recoveries and active cases at 390.

Uhuru agreed with Prtesident Museveni that cross border infections associated with truck drivers is a big problem and agreedwith the proposal of drivers getting a pass like the old yellow fever cards. He said this coupled with being tested 24 hours before departure and every two weeks to ensure no transmission, only stop at designated places and limit to 2 operators per truck.

President Salva Kiir of South Sudan commended the EAC for support to South Sudan in its efforts towards improving health and the fight against COVID 19. He said his government will commit all resources at its disposal to be used to ensure no importation of new cases and responding to effects in country and region. He said his country currently has 174 confirmed cases 2 discharged and no  deaths.

They also agreed to adopt a harmonized system for the certification and sharing of COVID-19 test results and information sharing.