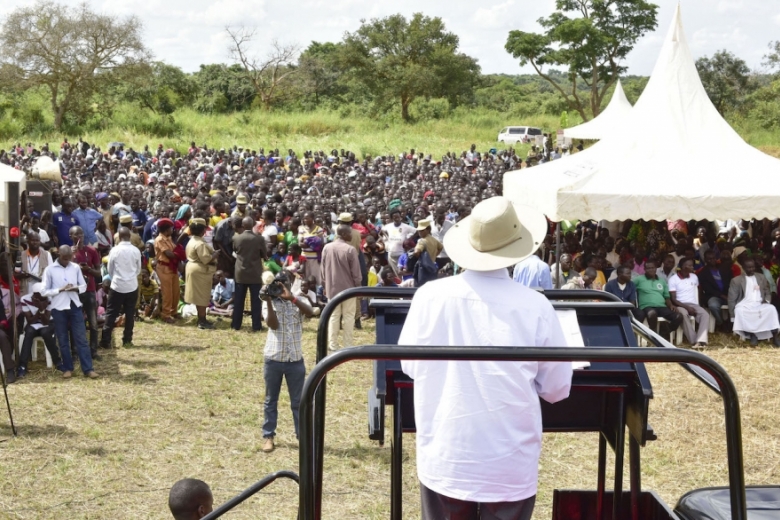 President Yoweri Museveni has unveiled a three-point proposal to the people of Amuru and Adjumani districts currently involved in the Apaa land conflict, saying the proposals will provide a win-win situation specifically for people who lived on the land before 1963 when the colonialists drew the boundaries and 2002 when government surveyors returned to the land to open up park land boundaries.

The three proposals include 1. Relocating the people to somewhere else in Acholiland fully compensated and supported by government; 2. Allow the people of Apaa to stay here but not expand anymore and; 3. Get another portion of land near populated area and resettle there away from the forest.

The proposal does not recognize people who knowingly settled on the land even when they new it was gazette animal reserve land.

“I came here to find a win-win situation for our people who have been tossed around by liars for so long. Some of our people have died in this confusion. It is because of our softness in the way we handle things otherwise we would hold some leaders accountable because they are the ones who incite violence. Liars told you to go to the UN compound that the UN will force Museveni I don’t know to do what? God has put us here, we shall study this problem and solve it,” he said.

The President who was armed with the history of the region and the colonial maps that clearly showed the boundaries of both districts had initially briefed the listening crowd the historical background of the conflict.

“Am sorry about your suffering caused by your leaders who specialize in telling lies. But God is there, we shall find a solution,” he said. This was after area MP said since the 80s, his people had been living on the land and that they have been discriminated against..

The President said after the colonialists, the government which was made up of people from the region including then Prime Minister Dr Milton Obote, Felix Onama, Eric Lakidi, Gino Obonyo, Alex Latim etc sat in parliament together with other people and decided that 1702sq kms be demarcated as East Madi Controlled Hunting area. This meant no human settlement and you could only hunt with a license from government. The President explained that even where there where human settlements like in Murchison Falls National Park, Queen Elizabeth National Park, Namugongo Martyrs Shrine which was the execution centre for the Kabaka of Buganda decisions where made even by decree to remove people.

“In the case of East Madi controlled hunting area, a parliament controlled by people from this area together with some legal extras. Those leaders must have wanted some advantages for this area. We the leaders who came after them know the importance of parks. Parks bring in more money US$1500m than coffee US$500m,” he said.

According to the President the new Parliament in 2002 decided to demarcate 827sqkm of the East Madi controlled hunting area into a park reserve meaning no human settlement and no hunting at all.

Using the Kinyankole proverb loosely translated as ‘the one who is last in bed is the one who arranges it properly,’ the President said since his government is in this situation they have to solve it.

‘The area was declared a hunting ground by a competent authority of Uganda in 1963. What we should ask is whether they were compensated and if not why. Could it be that because of some instability, they could not finish the process. Sometimes it’s good to let NRM stay longer to solve some of these things. We are here, we can study and solve this,” he said.

The President said his government will support and stand with the people who told the truth. He also said they would support families of the victims of violence and the injured.

“It is clear this is a hunting area even from the air. Much of it is a forest. But some of our people may have been here in 1963. Some would have come later. When there was war they ran to the camps and when the resolution to upgrade it into an animal reserve was made they were in camps. People came back without knowing and this is when the lies begun,” he said.

The President lashed out at leaders fighting over boundaries of Apaa and said Ugandans can stay where they want as long as they are there legally.

“Ask the MPs coming here to confuse you, how many of them have houses in Kampala and what clan they belong to. During the war, I took Acholi from Anaka to Bweyale.. now they have a big town there.. are you going to say Bweyale is Acholi. Some of us are struggling with real problems..good roads, clean water, schools hospitals etc then your leaders come and waste your time,” he said.

Museveni said Africa is struggling with colonial borders and explained that part of Acholi, Madi and Kakwas are in South Sudan and Congo. The President said on the recommendation of the committee, he can arrest leaders who incite violence or refer them to matoput.

“We cannot keep fighting over this but negotiate with neighbours through the East African Community, diplomacy and politics to try and unite Africa. This is not a problem because all the borders of Uganda both internal and external are described in the constition and the laws of Uganda quoting what the British left,” he said.

In his meeting with the local leaders from both districts, President Museveni said the Prime Minister Hon, Ruhakana Rugunda would be coordinating a committee of 10 people, five from each tribe to study the Presidents proposal and return with a conclusion after three weeks. The two sides however requested for eight names from each side.