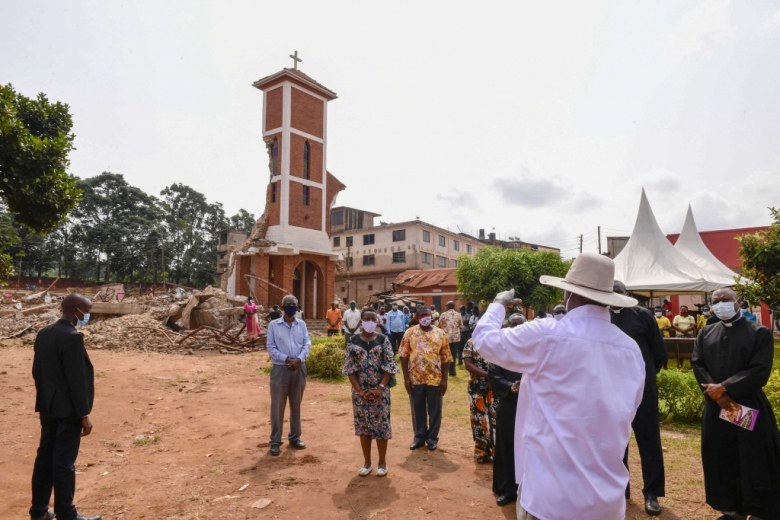 Whoever was behind the demolition of St Peter's Church in Ndeeba, Kampala, will be arrested and charged, President Museveni has said.  The President made the pronouncement this morning as he toured the site of eyesore piles of debris which have replaced what was once an eye-catching church.  St Peter's Church was brought down last Sunday night, in what is thought to be a long-drawn land conflict, causing a national uproar.  President Museveni asked the State House Anti-Corruption Unit to investigate the matter and together with the police, have arrested senior police officers and Kampala Capital City Authority officials thought to be complicit in the matter.  A businessman, Dodovico Mwanje, has been cited as being behind the demolition, laying claim to the land that housed the church.  At the scene, President Museveni, who was received by Rev. Augustine Kayemba, the church's vicar general, promised that he is going to intervene and resolve the issue. “I am sad about this church incident, but we are going to punish whoever was involved," he said.  Mr Museveni said even if the church was on the wrong side, all parties should have engaged in a dialogue to resolve the conflict peacefully without having to demolish the church. “Your people like the judges should have a limit. See what they are doing. Even if the church was wrong, they should have engaged you and negotiated with you instead of putting down the church," said the President.  President Museveni said that demolishing a church is a curse and rubbished reports that Government was involved in this incident. “It is not true that Government broke down the Church, that’s propaganda. I am a Christian who can’t allow this," Museveni said. He said he would invite the Namirembe Diocese Bishop, the Rt. Rev. Wilberforce Kityo Luwalira, and engage with all parties involved in the conflict to find a lasting solution. “I am going to call Bishop Luwalira and the land will remain for the church. I have joined this war and we shall build a new church," President Museveni said amidst applause from on-lookers. To the groups gathered, the President also reminded them to avoid huddling in large numbers given the threat posed by the Covid-19 pandemic.  “What you are doing is very dangerous, because Corona will spread easily when you gather like this. I request you to stay home or at your work places but avoid gathering,” said the President.   Rev. Kayemba, who briefed the President about the incident, said those who demolished the church had an order from Justice Eudes Keitirima and were guarded by the police.   Justice Keitirima's ruling of June 6, 2019 partly states that the Church of Uganda trustees fraudulently acquired the land where the church sits, ordering the cancellation of the title that had been in the names of Bishop Dunstan Nsubuga, Rev Y.S Kitaka and E Kitaka, who were trustees of Namirembe Diocese on the land.