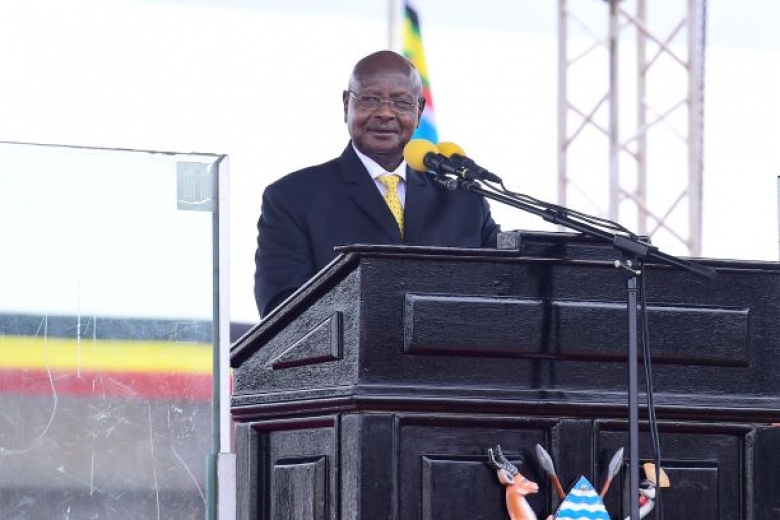 President Yoweri Kaguta Museveni together with First Lady and Minister of Education and Sports Hon. Janet Kataha Museveni hosted visiting Heads of States and Governments to a state dinner at the Commonwealth Resort in Munyonyo, Kampala.

The dinner was organized ahead of President Museveni’s swearing-in ceremony and was attended by 7 Heads of State, their spouses and a number of invited dignitaries.

Others at the dinner were; The African Union Commission Chairperson H.E Mahamat Faki, The Vice President of Uganda H.E Edward Kiwanuka Sekandi, The Deputy Minister of Foreign Affairs of the Russian Federation H.E Mikhail Bogdanov, The Minister of Combatants and Veteran Affairs of the Republic of Mozambique, Hon. Carlos Jorge Siliya among others.

President Yoweri Kaguta Museveni welcomed his guests to Uganda and for his swearing-in ceremony and commended them for showing solidarity with Uganda in its historical journey of development.

“Your Excellences, you are most welcome. I welcome you to Uganda and thank you for showing solidarity with the people of Uganda. Tonight is a day for eating, so I will speak more tomorrow at the swearing-in ceremony,” President Museveni said.

The President took time to explain to his guest why they had to organize the dinner outdoors saying that since Covid-19 struck the country, the Government never holds any meetings indoors but rather outside as a measure to fight the virus.

“It’s one of the measures we took to fight Covid-19 and has helped us. Since Corona started, we have only lost 345 people,” he said.

Earlier, President Yoweri Kaguta Museveni met and held discussions with a number of invited guests at the sidelines of the dinner in Munyonyo.

“Thank you for all the support, I’m glad there is now peace in South Sudan. When I left to come here at the Airport, I left Vice President Riek Machar in command,” President Salva Kiir said.

President Salva Kiir informed President Museveni that there will be general elections in South Sudan in 2023 and assured the President that they don’t want any more fighting in South Sudan.

President Museveni welcome him to Uganda and thanked him for sparing time to come and be part of his swearing-in ceremony for the 6th term in office.

President Museveni commended President Salva Kiir for his efforts in realizing peace in the youngest nation, South Sudan. “Thank you for coming,” he said.

The two leaders discussed the security situations in Libya and Chad in particular and Africa in general.

They agreed to call Heads State and Government Summit to discuss the security situation in Africa.

Thirty three (33) countries of the 54 countries have been represented at today's swearing in ceremony including 11 presidents, one Vice President, two Prime Ministers and Ministers of Foreign Affairs. Several regional international bodies have also been represented.