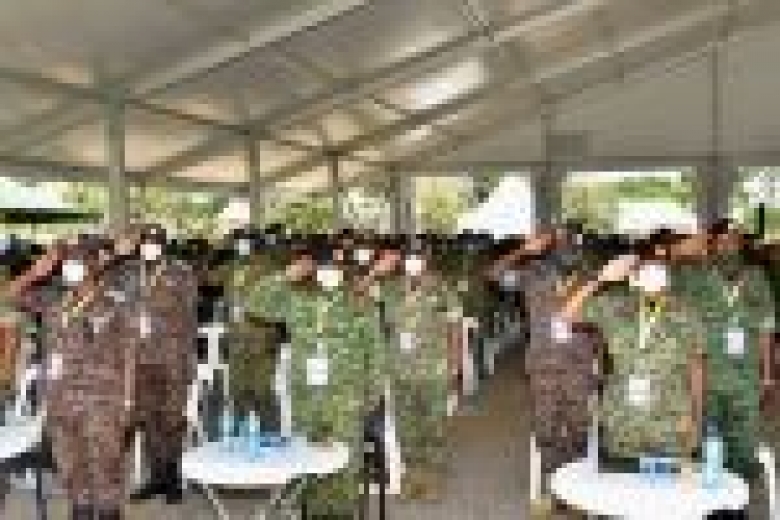 President Yoweri Kaguta Museveni who is also the Commander in Chief of the Uganda Armed Forces has urged the new UPDF Members of Parliament going to represent the Army in the 11th Parliament to support his 7-point priorities in the coming new term of office.

“In this new Government, I will insist on my priorities. So when you go to parliament, please support my 7 priorities. This time, no bad budgeting will go unopposed” Gen. Museveni said.

The President was speaking shortly after the election of Representatives of Uganda People’s Defense Forces (UPDF) to Parliament at the Lands Forces Headquarters in Bombo, Luwero district.

The seven priorities in his new term, the President said are; Equipping the armed forces to be second to non in Africa, Continue budgeting for Roads, Railways and ferries for effective and cheap transport, Electricity, Health, Education, Salaries for Scientists and security forces and adding money in the wealth funds such as Operation Wealth Creation, Youth Fund, Women Fund, Emyooga.

“We need to put more money in these sectors and we must do it. When you go to parliament, please support my seven priorities” President Museveni said.

The President said that the primary historical role of the Army’s representation in parliament is to listen to what is happening in Parliament and then report back to the army so that it takes decisions as a force.

“We are here to elect the 10 UPDF MPs. They were put in the constitution on account of our history. They would be like a listening post to what is happening in Parliament” Gen. Museveni told the attentive army officers.

Uganda, like many other African countries President Museveni said, had become ungovernable and a failed state.  He adds that the country was rescued by freedom fighters who started as a student movement in 1965 and later build an Army (NRA).

“The NRM/A liberated the country together with peasants. After we realized that the army can’t govern the country and we handed it over to civilians. The country is not ours, it is Ugandans, we are also just part of it” President Museveni said.

President Museveni said that the NRM has done a remarkable job of turning a failed state into a prosperous state, which is about to enter middle-income state.

“Before there was lack of everything including sugar, Soap, etc. but now there is surplus of everything. The problem we now have is market. Uganda is now stable because the economy is well run. Uganda has done very well,” President Museveni said.

Mr. Museveni warned about poor budgeting and distribution in the coming parliament and pledged to challenge such decisions using the powers given to him by the constitution as President.

“In the last 30 years, I have only used my powers against parliament on about four occasions including one in 2001 when we had a cabinet meeting in Gulu and I ordered that 23% must be cut from budget allocations of all ministries and given to Ministry of Defense so that we build capacity to defeat Kony,  and by August 2003 there was a the turning point in the war against Joseph Kony. The other was in 2006 when I insisted on putting more money on roads and electricity,” he said.

Commissioner Ssebaggala M. Kigozi, a member of the electoral Commission representing E.C Chairman commended the President and Government of Uganda in general, for the facilitation extended to the Electoral Commission that, he says has enabled them to organize and conduct elections across the country, in accordance with the constitution.

“The Electoral Commission wishes to thank you for the wise leadership that has transformed this country,” Mr. Ssebaggala said. He appreciated the excellent work and discipline of the security forces, which has enabled the country to witness a peaceful electoral exercise.

He requested that this patriotic conduct goes on through the post-election period, and always.

Article 78 of the constitution of the republic Uganda provides for representation of Ugandan People’s Defense Forces (UPDF) in Parliament.

Under the Parliamentary Elections Act, the UPDF Council, which is the electoral college for this election will be required to elect ten (10) representatives from among the nominees submitted by the Commander In Chief, One third (1/3) of whom shall be women.

EAC integration is for survival not politics – Museveni

For prosperity, Africa must unite.