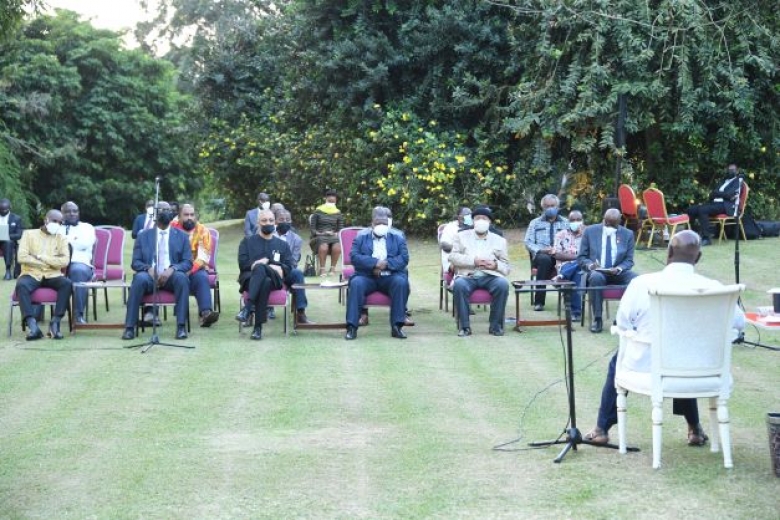 President Yoweri Kaguta Museveni has said that Africa must unite to guarantee the prosperity of its people and for its strategic security.

“The Africans will wake up because they have no alternative. Pan Africanism which was being pushed by our elders Julius Nyerere, Kenyatta, Modibal Keita, Seko Ture, etc, must be made clear to all the people you talk to,” President Museveni said.

The President was meeting with the Executive Council of the global Pan-African Movement at State House Entebbe.

The Executive Council which is led by Maj. Gen. Kahinda Otafiire the Minister of Internal Affairs who is also the Chairman Global Pan-African Movement called on the President at State House Entebbe.

The President called on the Global Pan-African movement to spread the pan-African gospel based on three issues of; Prosperity, Strategic security and Unity of the African people.

“If you want to have a modern life, you must have a more active trade. Therefore you need Uganda, East Africa and Africa. What will help you to widen the market for you is the Pan-African market,” he said.

With a united Africa, the President said, Africa can negotiate more with the external markets.

“Please unite because you are linked. And we have Kiswahili, which is a neutral language,” Mr. Museveni said.

The President promised to support the upcoming Pan-African Congress to be held in Uganda in the year 2024.

The Chairman Global Pan-African Movement Maj. Gen. Kahinda Otafiire said that the congress was delayed because of Covid-19 pandemic that ravaged the world and unwillingness of some member states to organize it.

“The governing council has decided to have it again. It has been delayed because of Covid-19. The council is now here to plan for the next 8th congress, which will be in Uganda in 2024,” Minister Otafiire said.

“We are presenting to you a budget as the Patron. We request you to get involved actively in the preparation,” he said.

The meeting was attended by delegates from Tanzania, Kenya, Zimbabwe, Ghana and Togo among others