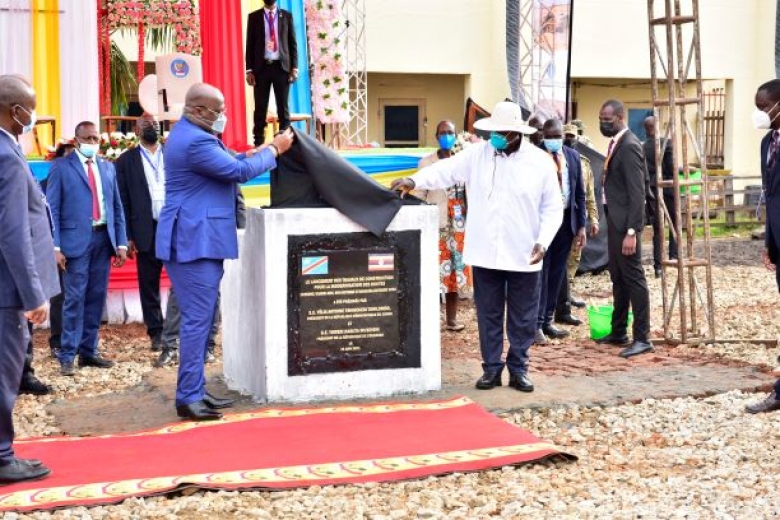 President Yoweri Museveni and his counter part President Felix Antoine Tshisekedi of the Democratic Republic of Congo have  commissioned construction works for the road infrastructure connectivity project covering the Mpondwe/Kasindi-Beni Road (80km); the Bunagana-Rutshuru-Goma road (89km and the Beni-Butembo Axis (54km) on the territory of the Democratic Republic of Congo.

“The people of DR Congo and Uganda are the same people from time immemorial. I thank Tshisekedi for bringing Congo to the East African Community, without DR Congo, the Community is incomplete,” President Museveni said, adding that they had discussed many things including the road project and the issue of security in the region in detail.

President Tshisekedi described the ceremony as a reinforcement of relations between the two countries.

“Today is a great day; a day which will reinforce relations between both countries. This important day that begins with building a road from here inwards is an initiative of President Museveni. I was delighted when he informed me about this project. When it is achieved, it will work towards promoting our development and improving our security. That is why as Congolese, we support this project,” he said shortly after a bilateral meeting he held with his counterpart at Mpondwe in Uganda.

“I thank my elder brother Museveni for the warm welcome and for the many important discussions we have had. I thank him for this initiative because it caters for the idea of the integration of our countries. As brothers, instead of looking to building walls, its better to build bridges. This initiative is what we must continue doing. he said.

In a communiqué issued after the ceremonies, the two leaders said it will cause a tremendous change in the social-economic well being of citizens in the two countries. They directed the contractor to execute the construction works in a timely manner.

The two leaders also directed that preparations for the construction of the Nebbi-Goli-Mahagi-Bunia road (190km), Bunia-Bogoro-Kasenyi road (55km) and Rwebisengo-Budiba-Buguma-Njiyapanda road including the Budiba bridge across River Semuliki (49km) be undertaken as soon as possible.

They also exchanged views on the security situation in the region especially in the Eastern Congo and stressed the need to maintain peace, security and stability in the region