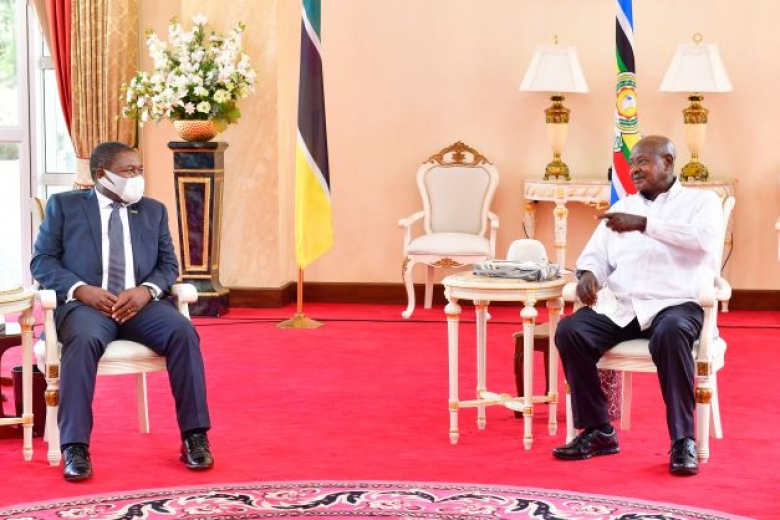 The two Heads of State reiterated their commitments made in May 2018 in Maputo, Mozambique to strengthen further the existing ties and review new areas of cooperation particularly in the fields of; Defence and Security, Immigration, Agriculture, Energy, Petroleum and Mineral Development, Works and Transport, Trade and Investment, Tourism, Youth and Culture, Labour and Employment, Environment, Education and Sports, among others.

While addressing the media, President Museveni Museveni referred to his earlier visit to Mozambique in 2018 where he visited their old base in Montepuez and met the war veterans whom together with the government of Mozambique have been supporting.

“I had an idea which I proposed to his Excellency which was to start a wealth creation association of veterans or their children so that they produce wealth for families but also for their country,” Museveni said, adding that, “it was to show Uganda’s gratitude to the people of Mozambique for their role in the liberation of Uganda.”

According to President Yoweri Museveni, 28 of the soldiers who formed the Front for National Salvation, which later became the National Resistance Army before it became the Uganda People’s Defence Force, were trained at Montepuez, the second largest city in the province of Cabo Delgado, in Mozambique.

Museveni however noted that since 2018, little has been done partly due to the insecurity in the area.

“I advised that why don’t you add a force to guard the activities, then we also contribute to the security in the area,” Museveni said.

The President also offered to train Mozambique nationals (Scientists) in wildlife conservation and protection to also reap from the huge benefits of tourism like Uganda.

“Before COVID19, we were getting 1.6billion dollars each year from Tourism and we were getting 1.5million visitors. Tourism in Uganda has recovered, it had collapsed during President Idi Amin’s time because animals had been poached but when we took over power, we stabilised everything. For us we are ready as the Uganda government to train any Mozambican who you will send here for wildlife courses, especially university graduates who should be scientists,” Museveni said. He said these will be conservationists and other protection forces to contribute to the security in the parks.

On his part, President Filipe Jacinto Nyusi of the Republic of Mozambique expressed gratitude to Museveni for accepting to support them in maintaining security and stability in Mozambique.

“We took some time discussing security matters given that ever since 1982 there are a lot of security issues to settle in there and to also support the war veterans,” Mr Nyusi said, adding that a meeting with the war veterans was held and shared experiences on how to support them.

He also revealed that his coming to Uganda was to establish how Uganda can invest in agriculture, citrus production and animal rearing in Mozambique given that Uganda has a lot of experience in that field.

Museveni revealed that next month a team led by Lt Gen Ivan Koreta, who is among the 28 soldiers who were trained at Montepuez under the Front for National Salvation, which later became the National Resistance Army before it became the Uganda People’s Defence Force, will lead a delegation of Ugandan agricultural scientists and Defence officials to establish how best Uganda can support Mozambique.

His Excellency President Filipe Jacinto Nyusi and First Lady HE. Dr. Isaura Gonçalo Ferrão Nyusi and other Senior Government Officials of the Republic of Mozambique who are in Uganda on a three-day State Visit, were received at State House, Entebbe with full ceremonial honours by their hosts His Excellency President Yoweri Kaguta Museveni and First Lady Janet Museveni.

According to the Joint communique, the two Heads of State reaffirmed the importance of the Joint Permanent Commission (JPC) as a framework for deepening bilateral relations between the two countries and reiterated their directive to their respective Ministries of Foreign Affairs to convene the next Session of the JPC in Kampala in 2022, on dates to be mutually agreed through the normal diplomatic channels.

They also directed their respective Ministers to work on a mechanism to facilitate the waiving of visas for Diplomatic and Service passport holders.

Mr. Museveni expressed his gratitude to His Excellency President Filipe Jacinto Nyusi for honouring his invitation and for the fruitful discussions they held. He later hosted the visiting delegation to a luncheon.

Mozambique and Uganda have enjoyed good relations of friendship and solidarity since the national liberation struggle stemming from the 1970s during the days of Frelimo, as the country fought for independence.