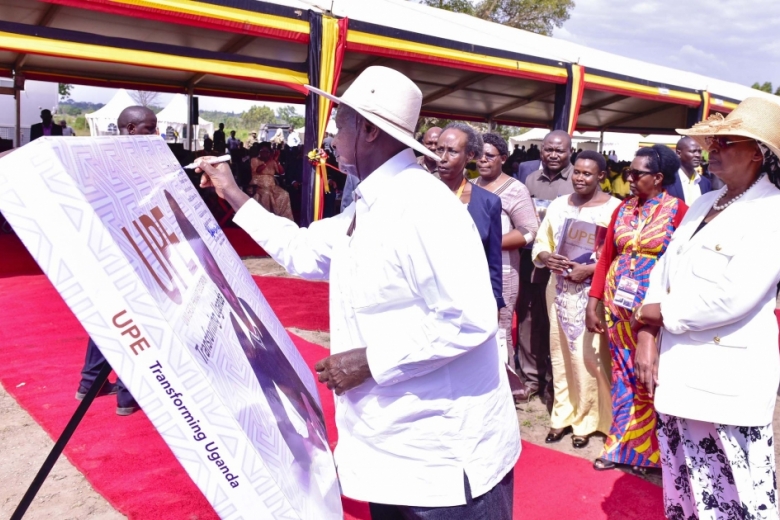 President Yoweri Museveni has strongly urged the people of Tororo District in particular and Uganda in general to cherish unity by embracing the first principle of NRM, which is patriotism.

“It is not good to celebrate NRM Day without understanding NRM principles. NRM members of Tororo District you need to pull up your socks on Principle One of NRM, Patriotism,” he stressed.

The President made the remarks while officiating at the 33rd anniversary celebrations commemorating the NRM/NRA liberation day.

The colourful ceremony that was characterized by a spectacular parade by Officers and Men of the Uganda Armed Forces together with the Uganda Police, Prisons Services and members of the public, was held at Muwafu Primary School grounds in Nabuyoga Sub-County in Tororo District.

President Museveni advised Ugandans to be patriotic and think all the time about Uganda but not individual tribes. He illustrated his point by calling the Acting LC5 Chairperson of Tororo District Ms. Stella Imukutet together with her councillors to the podium to demonstrate unity that the leaders in Tororo should be embracing instead of fomenting disunity.

“I have held the first Tororo Council meeting here today,” he said amid thunderous ululation from the gathering that was composed of both Iteso and Dopadhola, the two main tribes in the district. ‘I am very happy to see you celebrating NRM day together. I am happy to see that the Iteso came to the function,” he said.

The President who exhaustively explained to the gathering the mistakes of the pre-independence governments that promoted sectarianism, further elaborated the principle of patriotism by stating that loving Uganda alone was not enough as we need the people of East Africa and Africa in general for our prosperity in terms of bigger and wider markets for our products.

Mr. Museveni pointed out that the people of the area had not done enough in the sector of income generating activities at household levels. He, therefore, pledged to invite leaders from the wider Bukedi Sub-Region along with their LC3 Chairpersons to his demonstration farm in Kityeterera in Mayuge District, Busoga Sub-Region to see what can be done in a small piece of land.

He reminded the people of Uganda of their roles to create wealth in their homes while the government continues with its own of infrastructure development.

‘I know my Katala (role). You don’t have to waste time to remind me. What remains to be done is in my head,’ he said and enumerated the roads in the area that are to be worked on.

Regarding the issues of job creation, President Museveni asked visitors from Kampala at the function to pass via Tororo Town to see for themselves the mushrooming industries in the area that are providing employment to the youth and others that will, on completion, also provide thousands of jobs to the youth.

“Since the beginning of colonialism, we now have a factory that manufactures steel from iron ore. In the past, we were recycling old steel but now we have a factory for iron ore to the final product –steel,’ he pointed out.

The President later launched the Universal Primary Education (UPE) Book that spells out the history of the policy that came into effect in 1997 and the achievements so far registered.

Mr. Museveni said the idea that was introduced in the 1996 General Election Campaigns had bore tremendous fruits because in 1986 only 2.5 million children were in primary school. He observed that as of today, over 8 million children are attending UPE and 670,000 children sat the Primary Leaving Examinations (PLE) in one year alone.

He explained that all this was possible because of the NRM Government’s prioritization policy following the improvement of the economy. He said other programmes, such as compensation for the cattle lost and payment of veterans, among others, had to be put on hold in favour of universal education.

The Minister of Education and Sports Hon. Janet Museveni, introduced her team to the gathering. It comprised former Ministers of Education that included Hon. Geraldine Bitamazire under whose reign the UPE Progamme was started.

Hon. Janet Museveni, however, noted that the programme has enabled children, who may otherwise not have had the opportunity to acquire education and skills, to access the vital need. She commended President Museveni for being the brainchild behind the UPE programme.

During the NRM Day celebrations, medals were awarded to several recipients in recognition of their exemplary service to the nation.