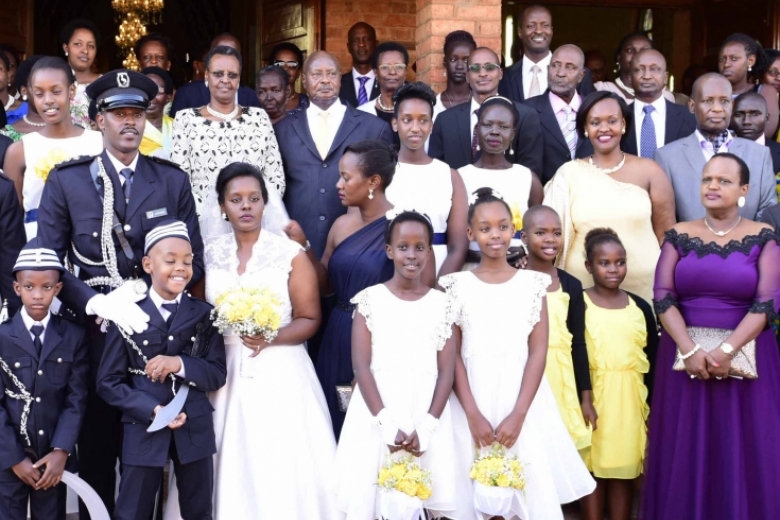 President Yoweri Museveni has urged parents to groom their children in spiritual life before they reach marriage age.

The President, accompanied by First Lady and the Minister of Education and Sports, Hon. Janet Museveni, was speaking at St. Paul’s Cathedral Namirembe, in Kampala this afternoon during the wedding ceremony of his daughter Georgina Nyangoma.

Nyangoma exchanged marriage vows with ASP Phillip Kiboyo Atwine and the Archbishop of Uganda, the Most Rev. Stanley Ntagali presided over the ceremony.

The bridegroom is the son of the late Major Emmanuel Kagumire Rujwengibwa and Joy Magara of Ruharo in Mbarara district.

President Museveni, who amid cheers, said that the institution of marriage has of recent become most industrious in the country, stressed the importance of spirituality values being inculcated into children.

“Children need to be groomed spiritually.  I, personally, being duty bound, thank Mama Janet Museveni for bringing up our children in a spiritual way of life,” he said.

In his sermon, Archbishop Stanley Ntagali reminded the new couple that marriage is a good institution but observed that it is the people who join it that make it difficult.

“Marriage is good. Enjoy its sweetness. Marriage is all about God’s love. Neither of you two is an angel,” he said.

The Archbishop encouraged the newly weds to shape their marriage as a couple. “Do not compare your marriage with others because marriage has dynamics. Singly, identify a problem that would spoil your marriage and reconcile immediately,” said Archbishop Ntagali.

Archbishop Ntagali expressed his thankfulness to President Museveni and the First Lady, Hon. Janet Museveni, for their parental care to the bride and also making them responsible people