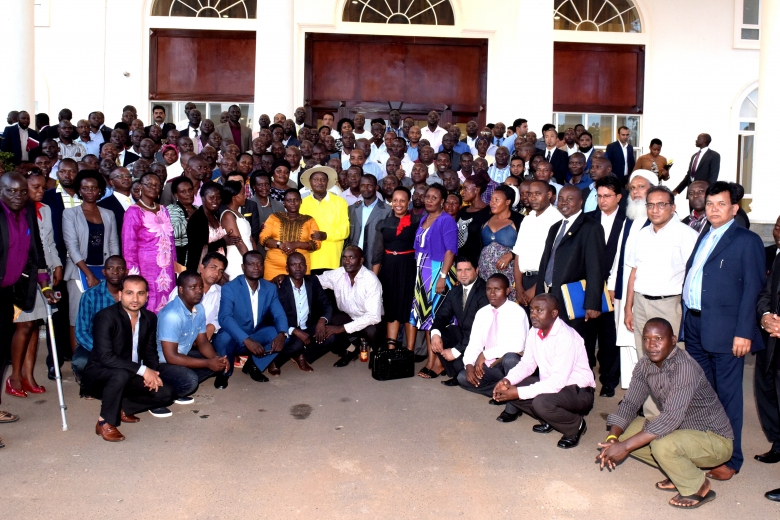 President Yoweri Museveni has urged traders in Uganda to promote Uganda’s exports for economic growth and job creation saying the country loses a lot of revenue in imports that would have been used to build industries locally.

The President yesterday met the business community dealing in importation of second hand commodities including cars, clothes and shoes at State House, Entebbe.

In a candid discussion he held with the traders, President Museveni informed them on the dangers of too many imports as compared to exports, saying the country now depended heavily on imports from China and India which earn about US$800m and US$900m respectively from Uganda businesses while Uganda earns only about US$57million, a trade relation he described as unequal.

"The enclave economy which had collapsed by 1986 is now back to life but still malnourished surviving on 32% of the population of the monetary GDP as the rest of the population is in non monetary GDP. Magendo is no more, but imports are too high and that's why I have called you so that we can deliberate on this issue," he said.

The President said that the money the traders spend on imports can be used in Uganda to build factories and assembly plants for things like cars and motor cycles which are more cheaper and durable and also to create jobs.

He said assembly plants ensure that people get quality products, freight charges are reduced and jobs are created.

“It is time for us to stop the hemorrhage of resources from our country. That kind of money we spend on imports can build about 40 factories in Uganda and create over one million jobs,” he said.

The President said governments' plan is to set up industries to replace the imported commodities saying that this would save money as well as creating jobs especially for the youth.

He noted that the move will see the business people partner with the investors to supply new items as they have been doing with the second hand things.

"We discussed this as Member States of the EAC in Arusha, but me I said let me first go and talk to my people before coming up with this new policy. Government is not going to impose this policy on our people without giving them time, this will take a period of say five years," he said.

The President urged the traders to come up with suggestions of how the government can best implement the policy in the best way possible and report back in a similar meeting in a period of three weeks. He assured the business community on the electricity generation saying that the only challenge is the prices, which he said will be checked and sorted.
- See more at: https://www.yowerikmuseveni.com/news-updates/president-traders-support-u...