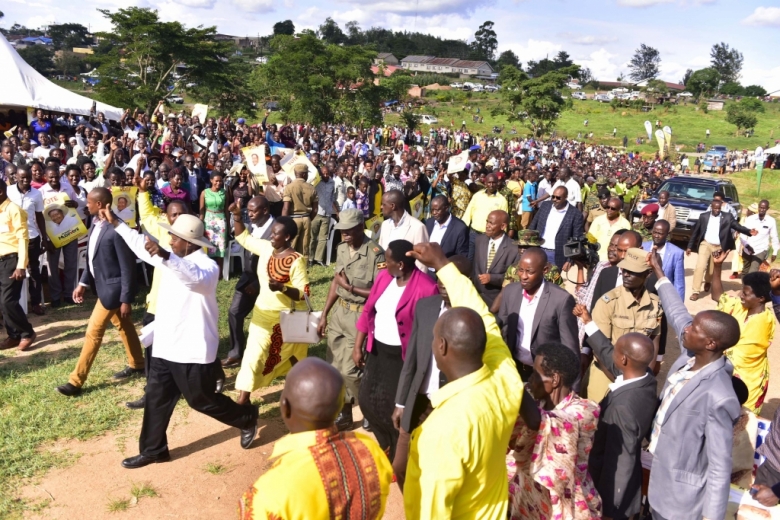 I also unveiled the foundation stone for St John's Church of Uganda office block and launched 600 Saccos before addressing a rally at Kazo Town Council.

St Andrew's Church, Buremba is important for me because it is where I prayed in 1981 shortly before I left for the Bush to start an armed resistance against the Obote government.

I went to see Mzee Christopher Rubarenzya, an elder, as a way of bidding him farewell even if I did not tell him the purpose of my visit. Later, he brought me to this church and we prayed.

Later, I again came to check on him and we still prayed at this church. I however realised that the sanctuary was still in the same state that I had left it. I resolved to join the Christians to rehabilitate it. I am happy that we now have a renovated church.

I am also happy to notice that Buremba, which for a long time was underdeveloped, is now a developed area with electricity and a good road network.

I thank the elders in this area like Mzee Rubarenzya for pioneering in many things and setting a good example and foundation for other residents. I also thank the Christians for using the church to spread gospel of development.

On my way to Buremba, I noticed that some people are establishing gardens and planting trees in swamps. I want all of them to vacate, and the Chief Administrative Officer should enforce this. When you drain swamps you interfere with the rain formation cycle which leads to drought.

At the launch of the Saccos and the subsequent rally at Kazo Town Council, I commended the wanainchi for taking the initiative to develop themselves through co-operative movements.

Government has a lot of interventions for organised groups and Saccos should be able to benefit. For example, the women and youth funds plus micro finance support to saccos.

Members of Parliament should help you with information concerning these and the district leadership should ensure that money allocated for such ventures reaches the intended groups.

Touring the exhibition, I noticed some people have taken to apiary, honey making and fruit farming. This shows that the people here have woken up. Working with the MP, we shall support these initiatives.