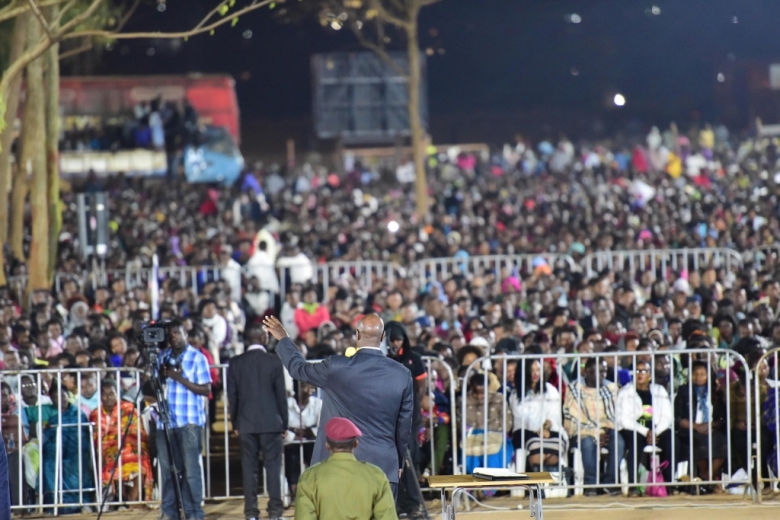 President Yoweri Museveni has called upon Ugandans to be tolerant of each other’s religions.

The President who was speaking during an over night service held under the theme of ‘77 Days of Glory ’ at the Rubaga Miracle Centre Cathedral in Kampala last night cautioned the congregation about behaving like the Pharisees in the Bible who pretended to be very religious yet when they left the holy place, they were bad people at heart.

“During our bush days, I did not allow religious segregation, although some people wanted to know why I never chased away the fighters who believed in the traditional religions. I always referred them to the Bible where Jesus was asked why he kept dining with the sinners and He said He had come for the sinners,” said the President.

Mr. Museveni urged the people to use the freedom brought about by the National Resistance Movement government and win over those who believe in the traditional religions.

“In the 1970s, worshipping of some religions was not allowed. When I see Ugandans praising the Lord in their own ways, I feel very happy,” he said.

President Museveni said that it is the peaceful situation in Uganda that has enabled people to worship their God and, therefore, Ugandans should not take the peace they enjoy for granted but rather use it to win over those that believe in the traditional religions.

“The Bible says that we shall know them by their fruits. Change people through good works that you do,” he said.

He told the congregation that the NRM government has been able to achieve peace by not merely talking but also through actions such as having a disciplined army.  He advised the church leaders to teach people to accept science and forego witchcraft and superstitious beliefs.

Turning to the issue of environment, the President further called upon religious leaders to join the fight against environmental degradation in the country so that the coming generations also benefit from them.

“People of faith, take it as your responsibility to leave the wetlands alone so that they are restored. The wetlands contribute 40% to the rainfall we receive here. If they are destroyed we shall have more long dry spells,” he cautioned.

The First Lady and Minister of Education and Sports, Hon. Janet Museveni thanked Pastor Robert and Ms. Jessica Kayanja for organizing the prayers noting that it would play a big role in changing the lives of Ugandans.

“Revival is not a supernatural remorse but a long term fruit of righteousness that changes lives,” she noted.

Pastor Robert Kayanja and his wife Jessica thanked President Museveni for his support to religions and the peace in the country saying that this has enabled people to serve their God.

“It is only in Uganda where you can have the President and the First Lady spending time at an overnight service. I want to thank the President for liberalizing the country because many people will not stop thanking for the good governance that has led to the transformation of Uganda,” he said.

Pastor Kayanja added that the religious freedom brought about by President Museveni’s government, has enabled the Pentecostal faith to grow in number. “Thirty years ago, Uganda was said to have only 10,000 Pentecostals but according to the last census we are over 1.5 million, ” he said.

During the service the President and the First Lady also listened to testimonies from some worshippers whose lives were said to have been changed by the prayers. Mercy Mbabazi, a former student of St Peter’s Naalya Secondary School, who was said to have been paralyzed can now walk.

A member of a royal family from Mitego in the Democratic Republic of Congo is said to have had his one child cured of kidney complications. Another person had eye sight restored while local celebrities, Qute Kay and Titie, have accepted Christ in their lives.

The Pastors prayed for the country to develop, be corrupt and witchcraft free. ENDS