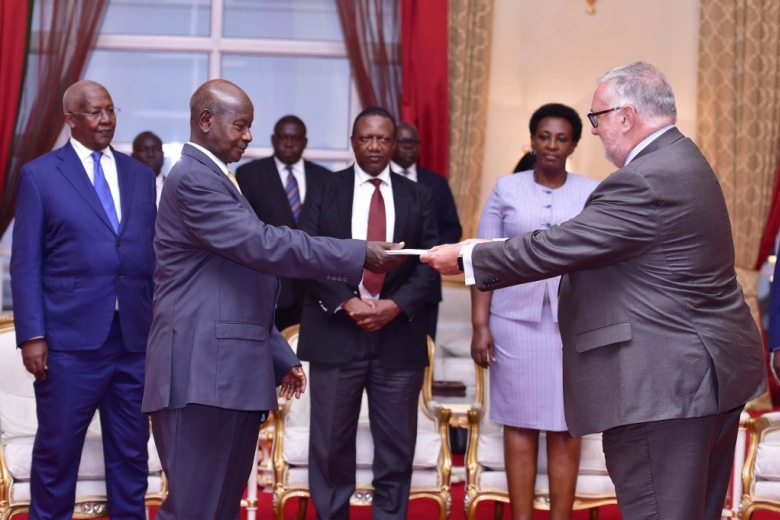 President Museveni welcomed the new French Ambassador, Jules Armand Aniambossou and told him that Uganda and France have enjoyed good political relationship for a long time. He said that the collaboration between the two countries should be enhanced further to include economic, water transport and other sectors.

Ambassador Aniambossou assured the President that France wants to enhance collaborative development ties with Uganda in the priority areas of education, energy and the tourism industry.

President Museveni, through the new Belgian envoy Rudi Veestraeten, extended an invitation to Belgian ship building companies to come to Uganda to venture into construction of water transport vessels to serve on Ugandan water bodies. He informed the envoy that Uganda still lacks water transport system. “Belgium is known because of its good history and ship building reputation,” he said.

The President also told the Ambassador that the African continent commands a big market potential for Europe. He, therefore, challenged the Western world companies to take advantage of the relationship between Europe and Africa and participate in the development of the natural resources on the continent.

Receiving letters of credence of the new Ghanaian High Commissioner, Ashietey Odunton, President Museveni saluted the leadership of Ghana’s political father, Kwame Nkrumah, for leading a political national revolution that was inspirational with regard to economic growth.

Ambassador Ashietey Odunton, who pledged commitment to work for strengthening of the relationship between Ghana and Uganda, thanked President Museveni for his good heart for the African continent and support for his country’s strategic development.