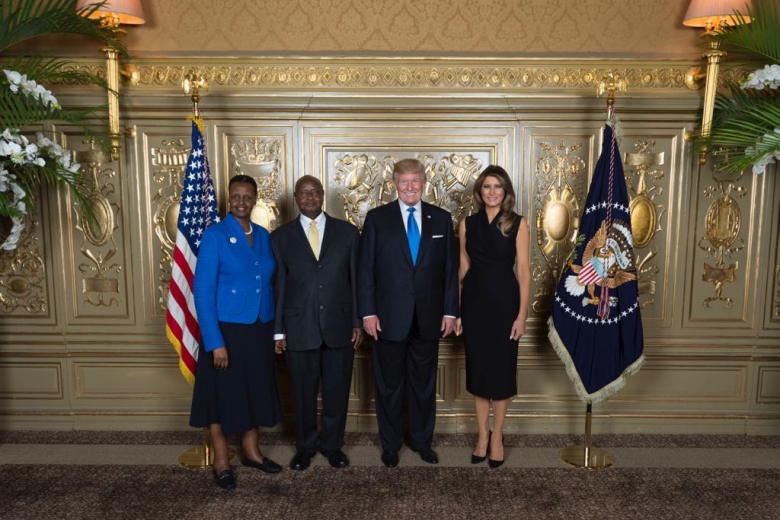 President Yoweri Museveni has expressed hope in the United States new focus on peace and security in Africa and the world saying this coupled with infrastructure development; trade and investment will put the country in sync with the rest of the world.

“There are four things we emphasized including market access, trade and investment, infrastructure development and peace and security. Once we cooperate in these areas, our relationship will be in sync,” he said, shortly after a luncheon hosted by President Donald Trump at the Lotte New York Palace in New York. He was accompanied by Uganda’s Minister of Foreign Affairs Hon. Sam Kutesa.

President Trump described the leaders as partners in promoting peace and prosperity.

“In this room, I see partners for promoting prosperity and peace on a range of economic, humanitarian, and security issues. We hope to extend our economic partnerships with countries who are committed to self-reliance and to fostering opportunities for job creation in both Africa and the United States,” Trump said at the luncheon.

President Trump praised Uganda’s fight against HIV/AIDS and pledged to continue their support in health initiatives.

“We cannot have prosperity if we're not healthy. We will continue our partnership on critical health initiatives. Uganda has made incredible strides in the battle against HIV/AIDS. In Guinea and Nigeria, you fought a horrifying Ebola outbreak. Namibia’s health system is increasingly self-sufficient. My Secretary of Health and Human Services will be traveling to Africa to promote our Global Health Security Agenda,” he said.

He said the United States will partner with the countries and organizations, like the African Union, that lead successful efforts to end violence, to prevent the spread of terrorism, and to respond to humanitarian crises.

According to President Trump, they are closely monitoring and deeply disturbed by the ongoing violence in South Sudan and in the Congo.

“Real results in halting this catastrophe will require an African-led peace process and a sincere -- really sincere commitment of all parties involved. And I know you’re working on that, and you’re working on that very hard. To assist in these efforts, I'm sending Ambassador Nikki Haley to Africa to discuss avenues of conflict and resolution and, most importantly, prevention,” he said.