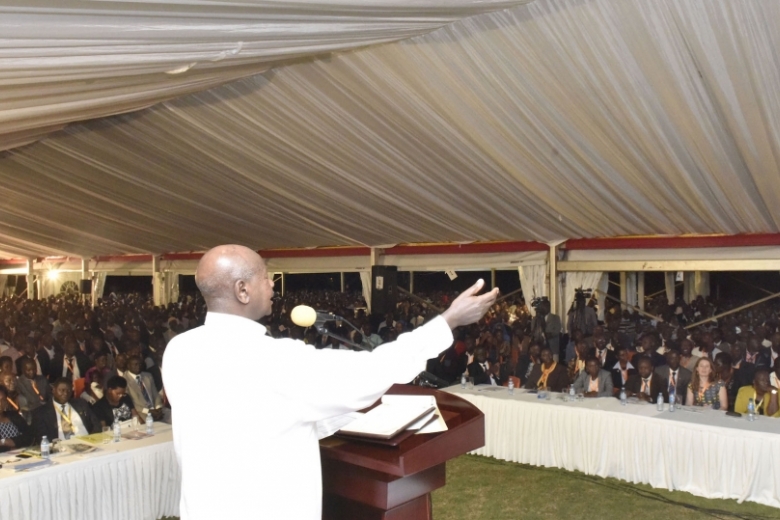 “We have met and agreed on how to handle salaries. The entry level for some of the lowest paid like teachers, soldiers, will go up. Science teachers’ salaries will go up to the regional level. We don’t want to hear that science teachers in Kenya are getting better pay than those in our country,” the President said.

The President was last evening speaking at the closing of a two-day Secondary Schools’ Head Teachers’ Retreat at State House, Entebbe. 3,000 Head Teachers from both private and government aided Secondary Schools throughout the country, attended the first ever National Retreat, that was organized by the Ministry of Education and Sports, under the theme of ‘The Head Teacher as the First Inspector.’

The Retreat aimed at engaging all Secondary School Head Teachers to reflect on the importance of their role of ensuring that standards are upheld in the delivery of an effective and efficient quality education in Uganda.

President Museveni also informed the Retreat that discussions are being held with the top management of the Ministry of Education and Sports to reduce the number of subjects taken by students in secondary schools.

“You are tiring the children. Education must not be a punishment but something you like. We are going to sort it out and it should not be something that the students resent,” he said

The President, again, called upon Head Teachers from government-aided schools to stop charging fees in Universal Education institutions where education is meant to be free for children of parents who cannot afford school fees.

“Go back and make social inquiries. Our philosophy was to remove the school charges for those who could not afford…government would then work on improving on the financial situation of these families until they had the capacity to pay. You say they can pay, they say they can’t, go back and get honest answers from the people. For you to say that all must bring money or the children be expelled, is very bad,” the President observed.

Mr. Museveni also called upon planners in the Ministry of Education and Sports to consult him before building new school structures; adding that they should consider building simple bungalow school structures compared to the expensive storeyed buildings that take a lot of money and lead to hindrance of building new secondary schools in other Sub-Counties.

“My plan was to refurbish old schools and build new simple structures but people, without first consulting me, built five-star hotels. Somebody should convince me that theses five star hotels are better than the simple structures. I am very bitter but because I was once a Mulokole, I have forgiven them,” he remarked.

He urged Head Teachers to emphasize patriotism in schools so that they can promote students’ love for Uganda, Africa and for themselves.

“Education in an African country is to liberate Africans from underdevelopment, marginalization, ignorance, and Injustice. You find schools producing products without a compass. You find children who think they are in Europe when they are at the shores of Lake Victoria. Help these children to have a bearing in life. Many Africans don’t love themselves. You find a beautiful black African and she tries to rub off the blackness; this is sickness. It is a form of self hatred,” he said.

He urged Head Teachers to encourage students attend technical schools so that they are helped to learn and appreciate practical work. He thanked the First Lady for having organized a successful Head Teachers’ event.

“I want to thank the Minister of Education and Sports for doing what has been lacking. This method is a very good one for instead of talking about each other, you talk to one another,” said Mr. Museveni.

Education and Sports Minister, Hon. Janet Museveni, urged the Head Teachers to always pray to God whenever they are executing their duties.

“I thank God who has enabled me to meet in person this army of educationists. I believe all of us have learnt or have been taught something from this retreat. You must learn to pray to God because He is the enforcer; you are just mere small instruments in the hands of the Almighty God. The children who come to you are God’s package. Your work is to unpackage them into what they can be,” she said.

Mrs. Museveni also called upon the Head Teachers to create a school environment that is not only limited to classroom or academic work but also one that encourages students to succeed and beautify wherever they live. She also informed school heads that the only way they could fight absenteeism in their institutions is to be present at the schools themselves, noting that this sets a good example to students and to the rest of teachers.

The Permanent Secretary of Ministry of Education and Sports, Mr. Alex Kakooza, commended Mrs. Museveni for working effortlessly to improve the quality of education in Uganda right after her appointment. He was happy that some of the objectives of the Retreat - sharing the best practices of inspection; enhancing transformation leadership, promoting efficiency and effectiveness in the use of school resources and upholding a culture of recognizing outstanding performance, were realized.