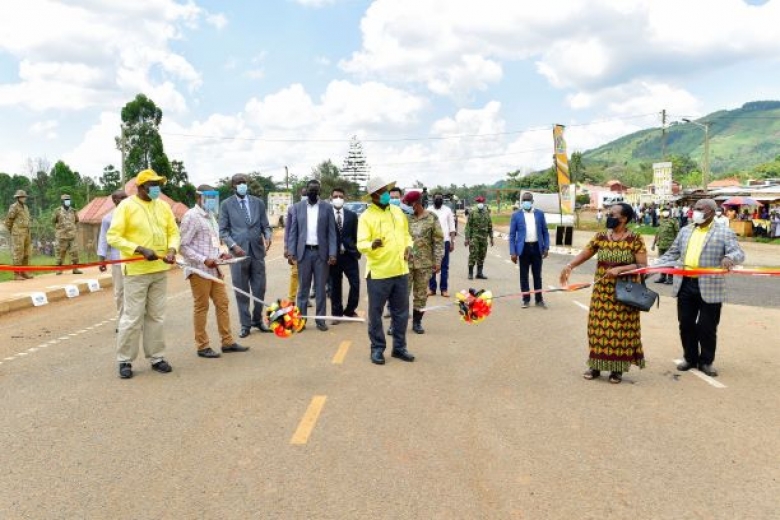 President Yoweri Kaguta Museveni has commissioned the 44.5km Bumbobi-Lwakhaka Road telling the people of Manafwa District that the National Resistance Movement (NRM) Government has always kept its promises to the people of Uganda.

The President was speaking at Manafwa District Headquarters shortly after commissioning a 44.5 Km Bumbobi-Lwakhakha road in Manafwa Town Council.

The Bumbobi-Lwakhakha Road is located in Mbale, Manafwa and Namisindwa districts starting at Bumbobi just outside Mbale City on Tororo-Mbale highway proceeding through Bubulo-Busumbu up to Lwakhakha on the Uganda-Kenya border, providing an international route to Kenya.

President Museveni said that the NRM government promised to change this area and indeed it has been changed with huge developments including good roads, electricity, water etc.

“We have been saying that we shall change this area even when we did not have enough money. We have now delivered our promise like we have done before. If Government does not collect taxes, you will not get such good roads. We are using our tax money to build these nice roads and many more are going to be constructed across the country,” he said.

President Museveni said that the problem now, with the people of Manafwa in particular and Uganda in general, are the people who are still stuck with working for the stomach only and not for incomes.  He urged them to engage in the four money sectors including commercial agro-production, industries, services and ICT.

“The medicine for this problem is what NRM has been telling you all these years.  The NRM tells you to work for the stomach (food security) and the pocket (incomes) but doing it with a calculation,” he said.

Mr. Museveni urged Ugandans to elect NRM so that they continue to developing the country.

The Minister of State for Works and Transport Hon. Peter Lokeris said he was happy to witness the occasion where the NRM government is fulfilling the pledges made while also advancing the NRM’s strategy for poverty eradication, Social-economic Transformation and regional integration.

“Your Excellency, we wish to thank you and the NRM Government for the strategies laid out to achieve social-economic transformation in this region and the country at large by integrating this region to the rest of the country through infrastructural development,” Minister Peter Lokeris said.

The Minister revealed that in Bugisu region, there are several ongoing projects which include rehabilitation of Namunsi-Sironko Road (40km), Mbale-Tororo-Mbale-Soroti-Kamdin Roads(341km) and Nakalama-Tirinyi-Mbale road (100km).

The Ag. Executive Director of UNRA Eng. Muhoozi Samuel said that the completed project is a measure of success through which UNRA is providing their customers with demonstrable evidence of a great road user experience.

“Our focus as UNRA in line with the government policy was placed on gaining a deeper understanding of these needs of our clients and stakeholders who have enabled us to be more pro-active and responsive in serving and meeting their expectations” Eng. Samuel Muhoozi said.

Eng. Muhoozi commended President Museveni, the Government and Development partners in particular the African Development Bank for extending support to the road programmes.

In a joint statement by the regional Moslem clerics who presided over the function, asked God to forgive the people for wronging the President who has maintained peace since 1986 and has also caused so much development including the brand new Bumbobi-Lwakhakha road commissioned today.

The Bumbobi-Lwakhakha road which is 44.5km long is part of the National Roads Network and was undertaken by M/S China State Construction Engineering Corporation Ltd and will promote regional integration and cross boarder trade with Kenya.

The project is on the Tororo-Mbale Highway proceeding through Bubulo-Busumbu up to Lwakhakha on the Uganda-Kenya border providing local and International trade link.

Traversing through 12 Trading centers the districts and towns along the road project are known for subsistence agriculture which involves growing of maize, bananas, cassava and rice cultivation all hinged for commercial purpose for local and foreign bigger market across the border.

It will also promote regional integration and cross border trade with Kenya and also assist in the administrative and social coverage in the region and reduce vehicle operating costs. It will also greatly support the growth of the tourism industry in Eastern Uganda.