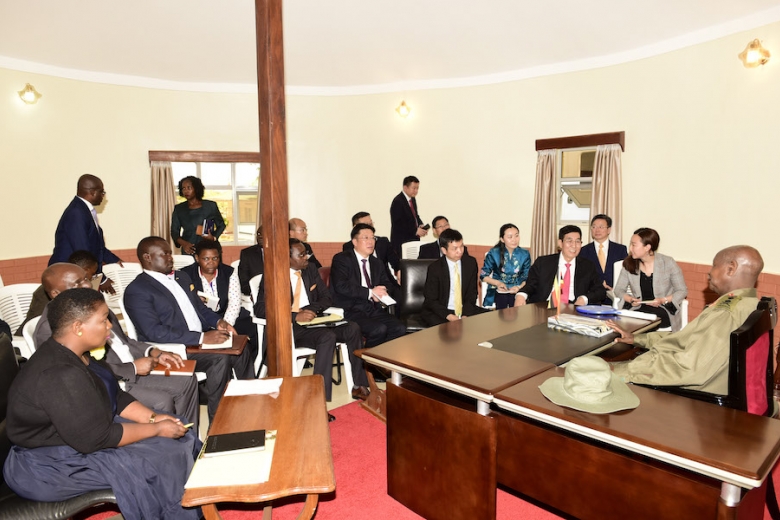 President Yoweri Museveni and National Chairman of the National Resistance Movement (NRM) has met and held discussions with a visiting delegation from the Communist Party of China (CPC) led by the CPC Secretary for Jilin Provincial committee, Mr. Bayinchaolu.

The Chinese Communist Party delegation, who are winding up their tour of the country today, have been in Uganda on the invitation of the NRM Secretary General, Hon. Kasule Lumumba, on behalf of the NRM Party.

He added that the trade between Africa and China is good for its people in particular and the world in general.

He revealed that their aim is now to unite Africa economically and added that it has taken time but it’s moving.

“We now have the East African Community, the common market of Eastern and Southern Africa (COMESA) and have agreed on the free trade in Africa such that Africa is united,” the President said.

On Party relations, President Museveni told his guests that they had to build the NRM Party on four principles of Patriotism, Pan-Africanism, Modernization and Democracy.

“We were fighting opportunists who were exploiting our people through sectarian division of tribe, religion, etc,” the President said.

The President welcomed the Chinese delegation to invest in Uganda in the textile sector as they had tipped him earlier on.

He told the President that they had fruitful deliberations with the NRM Party establishment and were delighted to be in Uganda on the invitation of the NRM Secretary General Hon. Justine Kasule Lumumba.

Mr. Bayinchaolu, who referred to President Museveni as a great re-known leader of Africa in the world, said that the President has devoted his energy to promoting relations between Uganda and China.

He revealed that he was happy with the progress of Uganda under the steady leadership of President Museveni.

“The historical achievements made in Uganda are as a result of your good leadership,” Mr. Bayinchaolu told the President.

He said Uganda has a very friendly business environment and added that Chinese investors will continue to come and invest in Uganda, more especially, in the sectors of energy, tourism and textiles.