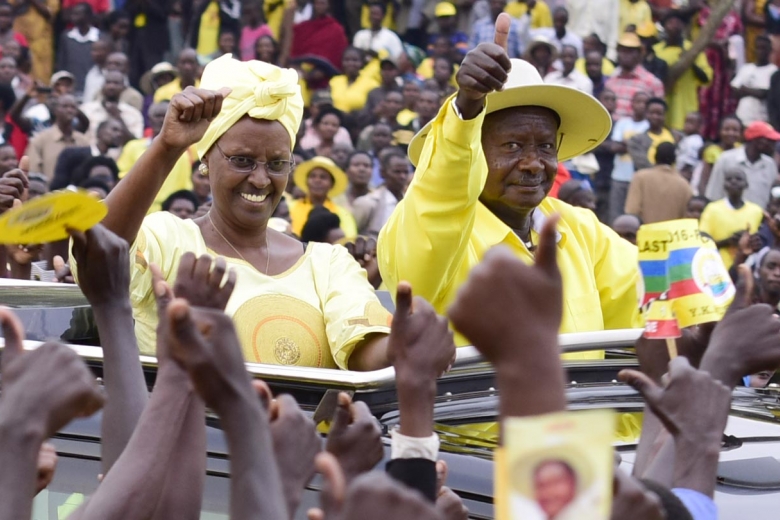 The National Resistance Movement (NRM) Party Chairperson and flag bearer for the 2016 Presidential Elections, Mr. Yoweri Museveni, has promised to extend water and electricity to Kiruhuura district in general and Kashongi County in particular.Candidate Museveni, who was yesterday speaking at a campaign rally held at Kashongi High School in Kashongi County, Kiruuhura district, assured the people of the area that he himself would ensure that water and electricity are brought to the people there. In the accompaniment of his wife, Mrs. Janet Museveni, he explained to the residents of Kashongi County that government would extend power to their area under the Kashongi-Ruhumba-Kashwa project. “Rural electrification has been one of our priorities. Kashongi, Kabushwere, Rwakahaya, Kenshunga and Tanyebayo, will all get electricity,” he said.Regarding the issue of water, Mr. Museveni said he had directed the Minister for Water and Environment, Hon. Ephraim Kamuntu to work on its extension to Kashonyi. “Kinoni, Kazo, Rushere, Kiruhuura, Nyakasharara and Rubindi have all got piped water. I have directed the Minister to work on the water for Kashongi,” he said.President Museveni promised to construct roads in the district. “We did the Ibanda - Mbarara - Rubumba road first. We are now going to construct the Kyenjojo – Kamwenge - Ryarukoma – Kigarare - Rwamaya - Kiruhuura road. Kashozi – Buremba - Kaliro and Kashwa – Kashongi -Ruhumba roads,” he said.Candidate Museveni informed the people of Kasongi County that the most important thing that the NRM government has taught is unity. “Other governments failed; people were fighting each other according to religion and tribe. The Democratic Party was for Catholics; Uganda People’s Congress (UPC) was for Protestants and Kabaka Yekka for the Baganda. We warned them that people were going to kill each other. Soon, Milton Obote and Kabaka Mutesa fell out and in 1971 Amin, came in. When the NRM came into power, the divisions ended and unity came,” he said.Mr. Museveni noted that because of the unity that the NRM has sowed, the country has become stronger and achieved development. “Development is for everyone. All the places I have passed through on my way here, Ibanda and Kazo, have electricity. All of you have access to electricity. Electricity does not have a rosary around it neither does it study catechism,” he said.Turning to the issue of education, Mr. Museveni promised to build a technical school for each constituency throughout the country so that the youth can acquire skills that will enable them get jobs. “The youth have learnt English, mathematics but still lack skills. Our policy is that each Constituency must have a technical school,” he said. He gave assurances that the government would pay for the youth who go back to technical schools to acquire skills.Candidate Museveni asked the residents of Kashongi to vote for him and all the NRM flag bearers; Genensio Tumuramye (MP), Sheila Mwiine (Woman MP), Col. Fred Mwesigye (Nyabushozi), Gordon Bafaki (Kazo) and Samuel Katugunda (LC5). He said that without NRM, we might go back from where we started. he said.The rally was attended by the Minister of Works and Transport, Engineer John Byabagambi, the Vice-Chairman of NRM for Western Uganda, Ambassador Matayo Kyaligonza and NRM Secretariat officials. ENDS