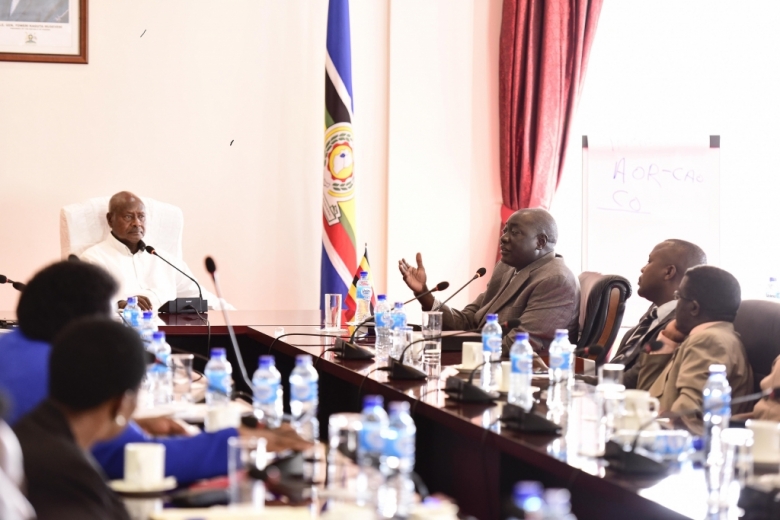 President Yoweri Museveni has commended the Parliamentary Committee on Public Accounts on Local Government for its well and elaborate researched findings on the Accounting Officers of District Local Governments and Municipal Councils countrywide on the irregularities of service delivery to the public.

The President made the remarks at State House, Entebbe while receiving the report from the Chairperson of the Committee, Hon. Okumu Ronald Reagan, who is also Aswa County MP in Gulu District.

The Committee made its findings during the execution of its mandate while considering the Auditor General’s Report for the 2016/2017 Financial Year. The Committee says that a number of recurring issues have continued to hinder service delivery in Local Governments for which the Committee has sought proposals and practical solutions as a way forward regarding issues in service delivery irregularities.

The committee areas of concern were related  to the dwindling portion of the national  budget allocated  to local governments, sources of revenue for local governments and the impact of creating  town Councils that are not viable in some districts, non performing accounting officers, theft through electronic money transfers from the ministry of finance,  planning and economic development to someone local governments as cited in the  districts of Kiruhura and Apac, central  government ministries setting standards for service delivery  in local governments to achieve the  set standards like some ministries  have set  an example namely the ministries  of Education and Sports, health, water among others.

On receiving the report,  president Museveni called upon the leaders to emulate the NRA/NRM doctrine of priotising when you have scarce resources and manpower, just as government  has managed to build the infrastructure of roads,  electricity, education, health and defense  among others inspite of scarce resources. "You people  you  should  be able to  listen and learn the experience  of NRM.  it's an illusion think that you can be everywhere,  do everything, at ago without priotisation.", he said.

He urged  Ugandans  to emphasize  the issue  of managing  scarce resources,  economising  manpower, to ensure  the little resources are not stolen and encourage  tax points on the  population through consumer taxes and discouraged local governments from taxing the poor population.

On projects planning and construction, the President appealed  to parliament  to supporthim on comparable salary increment for scientists like in other countries. "Somebody who can do a good job should be paid well. Focus on this crucial point is needed" , he said.

The President also  concurred with committee recommendation, that the local governments policy on decentralization of 1993 should  be amended.

He called upon community  Leaders to sensitise  the communities  about hygiene and sanitation, emphasize immunisation against  the thirteen  killers diseases,  safe water, anti malaria control.

The President supported the of idea that led to the creation of OWC in 2013 reasoning that a lot of resources  had been mismanaged by the NAADS coordinators, and that government has managed  to sink about shillings 1.1trillion in total into national livelihood programs, which has given the population a financial ray of hope in socio economic  development

The Minister of local government Tom  Butime and the Minister of finance, planning and economic development Matia Kasaija concurrently  agreed on enforcement on accountability for improved  service delivery by both ministries.

In the  report,  the chairperson of the committee  Okumu Ronald Reagan said, " the issues  to do with accountability  and auditing of public  funds should not be mixed up with politics." The Commmittee  looks  forward to have  a workable  solution  to the irregularities of public  funds in local governments.

Elaborating on the status  of Ministry  of Health and drugs supplies, it was revealed  that at times drugs reach expiry  date before consumption, other national  drugs  are found on market  in neighboring  countries like  the  DRC, Burundi. The President stressed that there  must  be proper coding  of drugs  right from  the initial  center of distribution and copied  for record purposes

The President thanked the commitee for the work done and expressed his support to ensure that their recommendations are implemented.