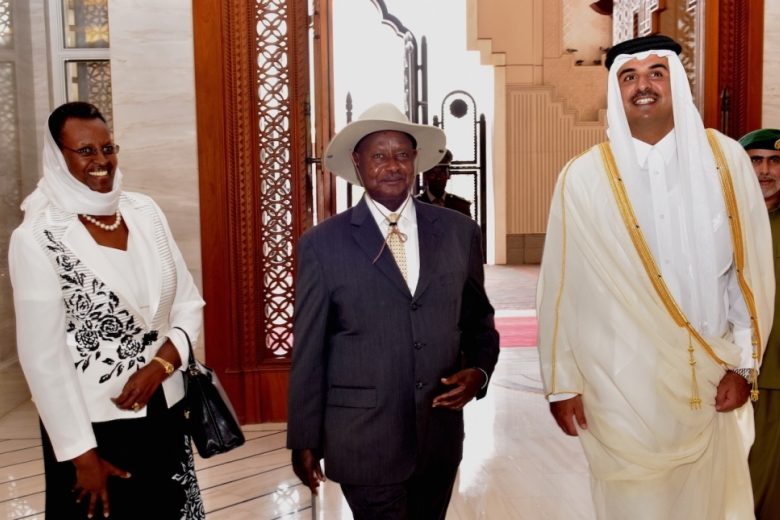 Uganda and the State of Qatar have today signed four key memoranda of understanding at a function witnessed by the two countries’ leaders in Doha.

President Museveni and First Lady Janet, who are on a three-day state visit to Qatar, together with their host, The Emir Sheikh Tamim bin Hamad Al-Thani, witnessed as their different ministers signed the agreements at the Emir Dewani (palace) in Doha.

The signing followed a session of bilateral talks between delegations of the two countries at the palace.

The first area of cooperation will be in defence. Foreign affairs minister Sam Kutesa signed on behalf of Uganda while Defence Minister Khalid bin Mohammad Al-Attiyah signed on Qatar’s behalf.

The third MoU, on reciprocal cooperation in the protection of investments, was signed by Uganda’s Minister of Finance Matia Kasaija and Sheikh Ahmed bin Jassim Al-Thani, the Qatari minister for economy and commerce.

The two countries also agreed to cooperate in the field of agriculture through an MoU signed by Mr Kutesa and the Qatari Minister of Municipalities and Environment Mohammad Al Rumaihi.

After the signing, President Museveni who received a presidential salute on arrival at the palace, was treated to a state luncheon together with his delegation, which included the First Lady, ministers Kutesa and Kasaija, Uganda’s Ambassador to Saudi Arabia and Qatar, Dr Rashid Ssemuddu and Jolly Kaguhangire, the head of Uganda Investment Authority, among other officials.