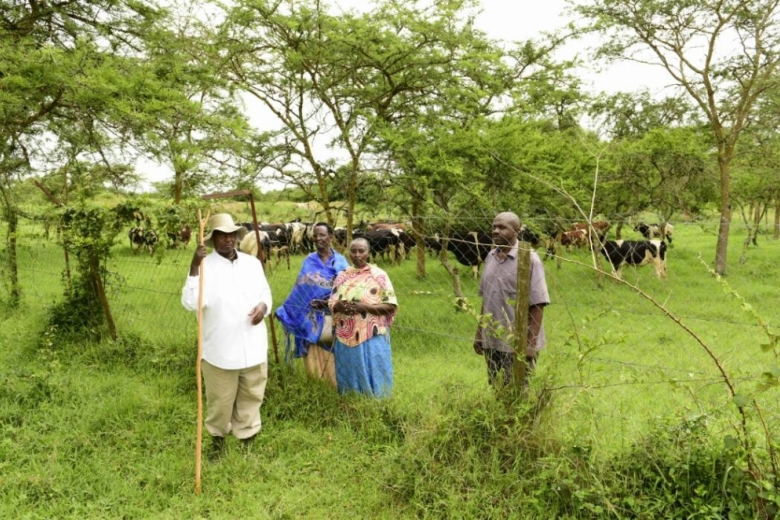 President Yoweri Museveni has reiterated his call to all leaders in the country to guide their people on ways to eradicate poverty in their homes.

“If only leaders could guide their people, poverty would be eradicated in society,” he observed.

The President made the remarks early this morning while grazing his cattle at his country home of Rwakitura in Kiruhura district.

The President who took time off his heavy schedule to also tour the farm with some members of his staff, showed them some of the grass recommended for feeding livestock. They include, Ejubwe , elephant grass (Ekibingoo), Emburara among others.

Mr. Museveni explained that he grazes his cattle in paddocks on a rotational basis to allow the grass to grow.

The President also showed members of his staff boundary trees he planted in 1967 during his youth.

“You see these trees? While boys were dancing in Mbarara, I was here planting these boundary trees called Omutumba in the local language. I planted them in 1967,” he said.

Mr. Museveni acknowledged greetings from his neighbors like Ms. Peninah Kaititimba who heeded his counsel to rear Friesian cows for better milk yields and income.

The two and a half hours tour of the farm, demonstrated President Museveni’s determination not only to walk the talk he has been educating people on, but also to focus on ensuring that wanainchi in Uganda get out of poverty in leading by example.