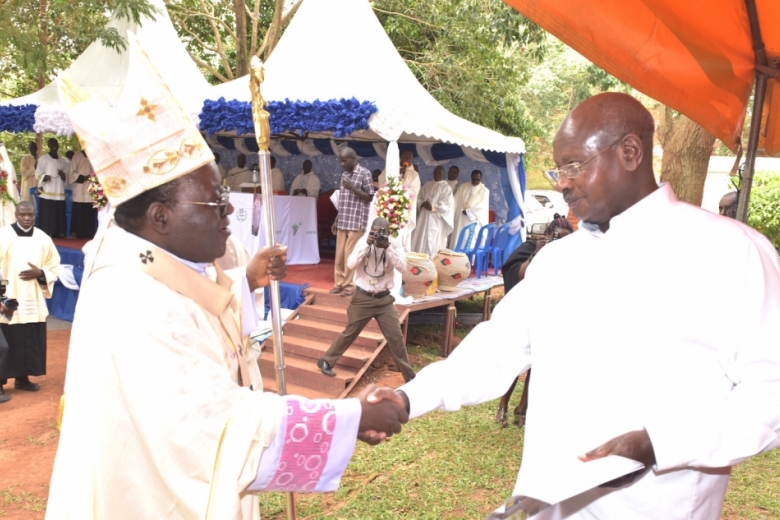 President Yoweri Museveni has thanked Ugandans for fighting for democracy and also for choosing a government that can ensure peace and security.

The President, who was today speaking to Catholic pilgrims during the Mass at Our Lady, Queen of Peace Kiwamirembe Catholic Shrine in Lweza Parish, Wakiso district, said he had come to join them to give thanks to the Virgin Mary for the peace and security in the country.

“I am here to pray with you to the Virgin Mary and thank her for the peace and all the good things she has done but also to share some of the challenges still remaining,” he said.

The Catholic Church throughout the world holds annual prayers every 15th of August to mark the assumption of the Virgin Mary to heaven.

President Museveni used the occasion to apologize for the insecurity that rocked the Kiwamirembe hill during the 1970s when Tanzanian soldiers came to liberate Uganda from the Idi Amin regime.

“I am sorry for the insecurity that rocked the hill. I was with the Tanzanians who put the guns on this hill but I am glad that the wars brought peace and development to the area,” he said.

Kampala Archdiocesan Prelate, the Most Rev. Dr. Cyprian Kizito Lwanga explained to the congregation that the place was named Kiwamirembe after the then Lweza Parish Priest and his parishioners started to pray for peace to be restored.

“In the 1970s, we had a civil war here and those that were fighting put up big guns here. The prayers were heard and no bombs went off at the hill,” he said.

Archbishop Kizito Lwanga thanked President Museveni and the NRM Government for the peace and security in the country. He read out a message from Pope Francis reminding the pilgrims not only to pray for themselves but also to pray for their loved ones, instructors, leaders and the vulnerable.