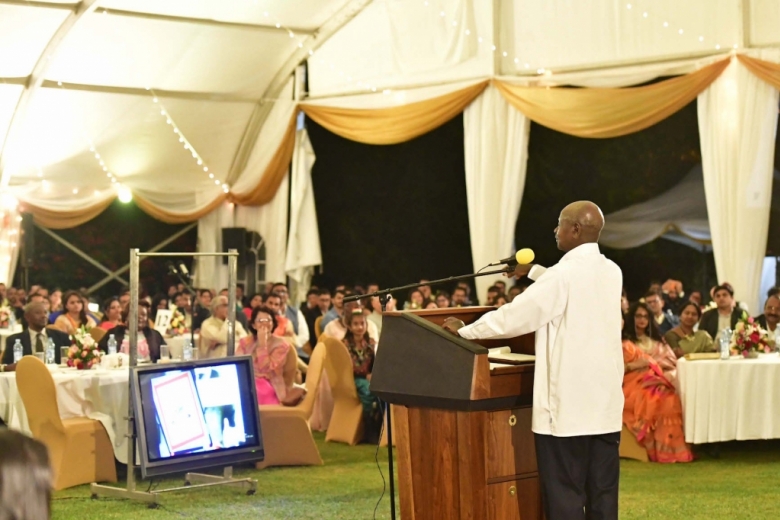 President Yoweri Museveni has commended the Indian Community in Uganda for the enormous contribution towards the economic development of Uganda before independence and also for the efforts towards national economic recovery after the protracted armed people’s struggle that ushered NRM into power in 1986.

"The most important thing between the Indian community and the local community in the country is complementarity of the two communities in trade. The Indians accelerated economic growth of the country by stimulating industrialization through trade, manufacturing, delivery of both human and animal drugs and extensive agriculture," he said.

The President was addressing members of the Indian community in Uganda during ‘Diwali Celebrations 2019' dinner that he and the 1st Lady hosted at State House, Entebbe. Vice President, Edward Kiwanuka Ssekandi, Prime Minister Ruhakana Rugunda, Cabinet Ministers, MPs and other government officials, attended the dinner.

The President said that when NRM came to government, it made clear that the presence of the Indian community in Uganda had to be recognized for the positive role the Indians had been playing in the development of the country.

"It was indeed a big mistake for Idi Amin to expel the Indians. They were a big asset to Africans," adding that there was also need to make it clear by 1986 in the National Resistance Council (NRC) debate and in Parliament in 1995 to deliberate on the return of properties to the Asian Community returnees.

"Today, I am very happy. NRM was very clear for it settled the problem and on return, the Indians responded. They have done much on the economic recovery and development of Uganda," he added.

Mr. Museveni commended the Indian Association in Uganda for its pivotal role in the enhancement of prosperity through a diversity of economic activities. He assured them that the threat of criminal acts and insecurity have already been minimized adding that they will be thoroughly defeated.

"You will enjoy and be more peaceful in Uganda than ever before," he stressed.

Regarding corruption, the President advised the people of Uganda that as victims of the vice, they have to move determinedly and report to authorities in order to fight for banishment of the vice from our society.

Presidency Minister, Hon. Esther Mbayo, commended the President for hosting the Indian community to Diwali dinner adding that the event goes a long way to emphasize cooperation not only between the people of Uganda but the world at large.

The Chairman of the Indian community Association in Uganda commended the Government for creating a political-economic environment that has attracted more Indians to participate in investment opportunities in the country.