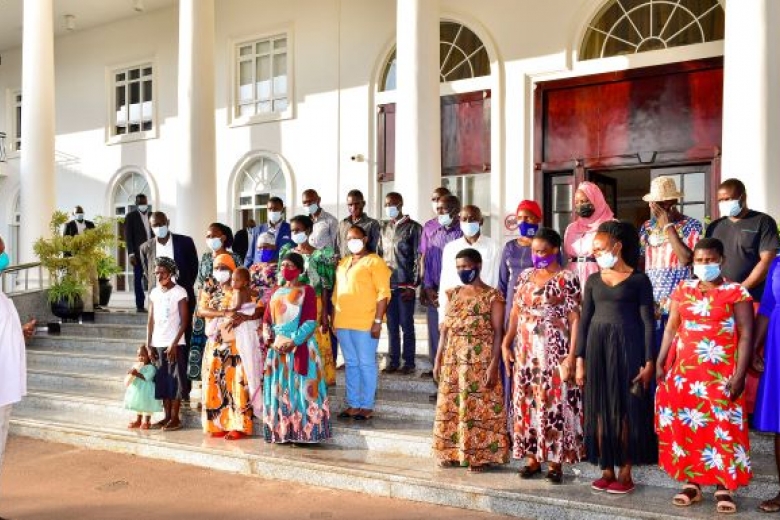 President Yoweri Museveni has condoled with the families who lost their loved ones to Bijambiya gangs that have been terrorising residents of Masaka and Lwengo districts.

“I invited you here to condole with you. We shall get these criminals. Some suspects have been arrested because they left all sorts of clues that we are following,” the President said. He made a contribution of Shs 10 million to each of the 25 families that were affected.

Machete-wielding criminals, also known as Bijambiya, have been terrorizing villages, killing people with impunity in Masaka and Lwengo districts. Some of the victims are pregnant, others breastfeeding mothers while others had small children left in their care.

The President responded to several issues raised by Nkwanzi Mary Gorreth on behalf of the victims including curfew which they said gives an opportunity to the wrong elements to attack families in their homes; closure of education institutions which they claim has caused youth to resort to using drugs and drink alcohol; lack of electricity that gives a chance to bad people to hide under cover of darkness and youth unemployment that has made them susceptible to criminal acts and closure of Churches and Mosques which had a great impact in counselling and guiding the youth.

“We put a curfew to stop illness but we can't stop people from defending themselves. Many people died including Bishop Kagwa, Ms. Mubanda, Ms. Ssentongo etc. we have lost about 3000 people although other countries have lost more,” the President said.

The President agreed that the lack of electricity in the rural areas is key in fighting crime and said while the rural electrification is in the process, it will take some time. He urged Churches and Mosques to use radios and televisions to preach to the people as one of the ways in mitigation COVID-19 pandemic.

“If we open up before people get vaccinated, we shall have more issues,” he said.

Ms. Nkwanzi Mary Gorreth commended the President and the NRM government for saving the lives of Ugandans from the deadly Covid-19 pandemic. She also thanked President Museveni for the improved road network in greater Masaka including the Masaka-Bukomansimbi, Ssembabule-Mpigi, Masaka-Bukakata, Yellow Knife in Masaka City and the current construction of Nyendo, Kijabwemi in Masaka City. She also thanked the government for the many government aided primary and secondary schools and for paying teachers during lockdown.

The former District Chairman for Lwengo District Mr. George Mutabazi who also briefed the President about the families that were affected mobilized the victims.