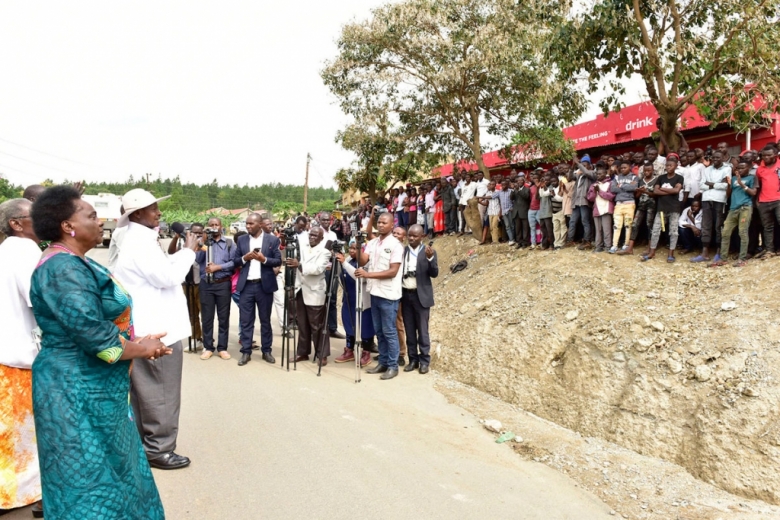 President Yoweri Museveni has announced that the government will support families that were affected following the explosion of a fuel tank that burst into flames killing over 20 people one week ago in Kyambura village of Rubirizi District in South Western Uganda.

“For the condolences, it is for government to help its people who have lost lives and property; but for compensation, it is the company which will pay the affected people” he clarified.

The President was speaking to the bereaved residents of the area at Kyambura Primary School playground in Kicwamba Sub-County in Rubirizi District.

President Museveni, who said that he had come to Rubirizi District to condole with the people of the area, said that government will extend support of Shs.5,000,000/= (UGX Five Million) to each family that lost their loved ones while those still in hospital will receive Shs.1,000,000 (UGX One Million) each person. He also announced that those whose shops and household items were destroyed will be helped.

Eye witnesses revealed that the Kasese bound fuel tank lost control due to brake failure and consequently rammed into a commuter taxi and a saloon car and exploded into flames killing several people instantly and destroyed property worth millions of shillings. Rubirizi District officials confirmed that 7 identified victims have already been buried while other corpses are still in Kampala City mortuary waiting for DNA tests to be carried out as some of them were burnt beyong recognition.

While expressing his sympathies to the people of the area, President Museveni asked the people of Uganda to support government move that will require all motorists to have all necessary requirements including comprehensive insurance that will help in cases similar to that of Kyambura, adding that those who put cars that in dangerous mechanical conditions will be held accountable.

He cautioned car owners to always make it a priority to have experienced drivers as well as making sure the cars are good mechanical conditions. He asked people to hurry the investigations to see that the victims get a fair compensation.

General Duties Minister, Hon. Mary Karoro Okurut thanked the President for coming to sympathise with the people of Rubirizi. She also extended condolence message to the affected families.