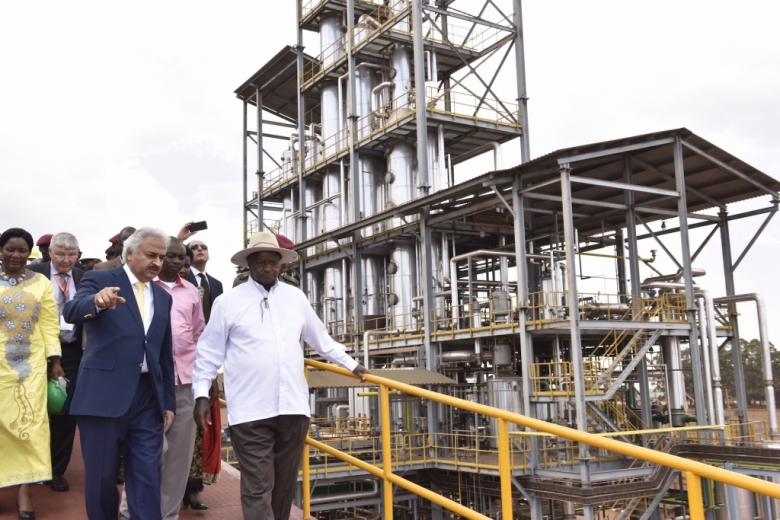 President Yoweri Museveni has highly praised Kakira-based Madhivani Group for their contribution to the economic growth of the country. He assured them of the bill to be tabled in Parliament to allow the blending of ethanol with petrol.

“I would like to thank the Madhvani Group, despite the disappointment by Idi Amin. The family pioneered the production of sugar in Uganda. By 1972 they were producing 70,000 tons but today they have almost tripled the production to 180,000 tons,” he said.

The President was today commissioning a state of the art ethanol distillery at Kakira Sugar Limited in Jinja district. The US$36 million facility, which is the largest in the East African Region, will be producing 20 million litres of ethanol annually.

Ethanol is distilled from the fermentation of materials containing carbohydrates or sugar. Ingredients for making ethanol include sugarcane molasses, grain, sorghum, maize and sugar beet among others. Ethanol can then be processed to produce fuel and extra-neutral alcohol.

President Museveni thanked the Madhvanis for supporting industrialization by producing industrial grade sugar used in pharmaceutical factories for making syrups, sugar coating drugs and also for making soft drinks. He added that this move has not only saved the country the much needed foreign currency that would have been used for importing sugar but has also provided Ugandans with employment.

The President took advantage of the occasion to castigate the notion nurtured by some distractive elements who impute that the factory is for Indians.

“I don’t like the confrontational approach as if Indians are doing something that solely benefits them. They pay taxes, employ our children and the money remains here in Uganda. Therefore, when you say Indian factory, it is wrong; it is Ugandan factory. The factories for Indians are in India. I, therefore, thank the Madhvanis for first producing sugar, electricity and now petrol,” he said.

President Museveni pledged to address the issues to regulate the sugar industry but urged the Madhvanis to partner with farmers with large chunks of land for production of sugar-cane, as the cane is not a high value crop. He said people with small land holdings should be left to do intensive farming like the growing of fruits that give high returns.

Turning to the issue of prices payable to sugar-cane out-growers, President Museveni advised the buyers and out-growers to sit together and agree on the prices taking into consideration the market prices globally.

The Minister of Trade, Industry and Cooperatives, Hon. Amelia Kyambadde, noted that the ethanol project will create more jobs. She assured sugar manufacturers in the country that government will address their concerns. She congratulated the Madhvanis and the NRM Government for the economic growth being realized today in Uganda.

The Director of Kakira Sugar Limited, Mr. Mayur Madhvani, said they are developing very good relations with the 9,000 sugar cane out-growers who are paid Shs.150 million annually for their sugar-cane.

On arrival at Kakira, President Museveni visited the family of the Late Jayant Madhvani where he was received by the widow, Mrs. Meena Jayant Madhvani and Uganda’s envoy to France, Ambassador Nimisha Madhvani.

President Museveni was later conducted on a tour of the premises of the sugar factory in a cart driven by Mr. Mayur Madhvani. The President was also shown the 6,500 tons of sugar that is ready for sale.

Those present, among others, was the Kyabazinga of Busoga, His Highness William Gabula Nadiope. ENDS