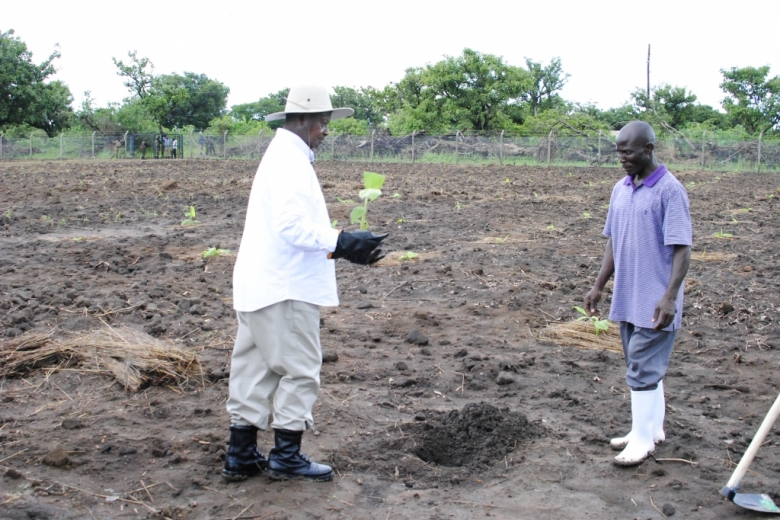 This the third presidential demonstration farm after the one in Kawumu, Luweero and Kityerera in Mayuge, Busoga sub-region.

After the planting exercise, I held an interface with journalists. It is unacceptable for many Ugandans to live in poverty in a country that has good soils, enough rain and excellent climate.

I oppose the idea that society should have two categories of people, the rich and the poor. I have worked against this since the 1960s. I believe this country is rich and fertile, there should be no reason for such classes.

I have over the years urged wanainchi to embrace commercial agriculture. We have had campaigns like Plan for Modernisation of Agriculture, NAADS etc but these seem not have filtered down to the people.

This has also not been helped by the media which would ideally amplify such campaigns. Instead they concentrate on non-issues like the English premier league, politicking etc.

The core function of radios is to educate, inform and entertain. However radios in Uganda concentrate more on entertainment.

In establishing these farms, I want to involve myself directly in commercial agriculture and lead by example. It seeks to demonstrate the rational and frugal use of limited space to maximize outputs.

This is the four-acre model, where each acre is dedicated to a particular high-value crop. I assure farmers that there is market for products like coffee and maize. But you must ensure the quality is good.

On this farm, I am planting sunflower, oranges, cassava, mangoes and pineapples. I will return in September to begin harvesting.