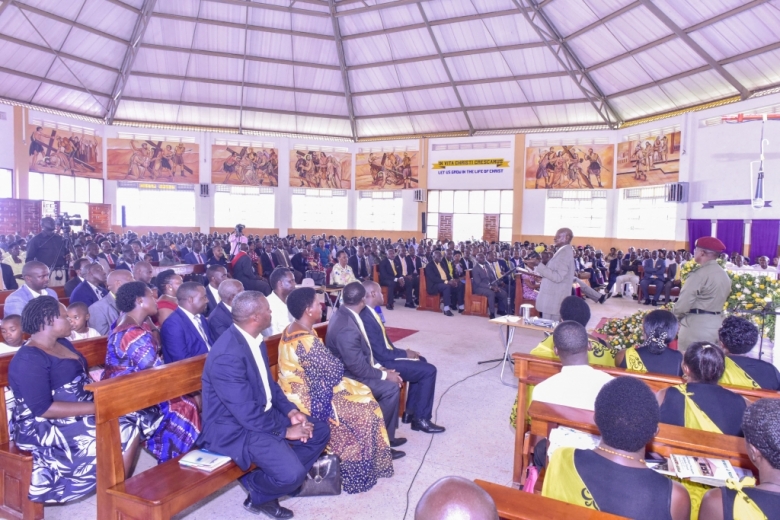 President Yoweri Museveni has hailed the people of Ntungamo District in South Western Uganda for being united despite having different religious affiliations and also for now waking up to fight  household poverty through practicing commercial farming.

“I congratulate the people of Ntungamo for being together despite various differences and for starting to come up in the fight against poverty,” he said.

The President made the remarks at the Sacred Heart Ntungamo Catholic Church in Ntungamo Municipality where he and the First Lady, Hon. Janet Museveni joined many Christians to celebrate Mass to thank God for entering the New Year 2020.

Mr. Museveni also commended the people of the area for building a magnificent Church and particularly thanked the Parish Priest, Rev. Fr. John Baptist Tumusiime for showing followers the way to eradicate poverty from their homes.

“In the Bible, it is written that God made man in His image and told him to establish dominion over nature. So, poverty is caused by a lazy person and diseases lack of hygiene and sanitation,” he said.

The President further advised the people of Ntungamo District against alcohol consumption and promiscuity. He informed the congregation that government is to fund several Savings and Cooperative Credit Organizations (SACCOs) in each district in the country such as mechanics, saloon owners and artisans, among others. He also assured them of government’s determination to fight and eradicate corruption in the country.

President Museveni later donated Shs.100 million to the Specialized Raphael Children’s Clinic that has been established by the Catholic Church that he also opened. He gave to the Christian’s SACCO Shs.30 million while the Yellow Women’s Group received Shs 20 million.

The Minister of Education and Sports, Mrs. Janet Museveni, commended the people of her area for the love they always have for the President. She congratulated them upon concluding the year 2019 and wished them a prosperous 2020.

The Main celebrant of the Mass Rev. Fr. John Baptist Tumusiime, in a homily, urged the congregation to uphold the message by Pope Francis to make the New Year 2020 a period of prayer for peace.

He commended President Museveni for his knowledgeable on Bible issues and the First Lady for always being prayerful. Fr. Tumusiime wished the people of Ntungamo in particular and Uganda in general a happy and prosperous New Year 2020.