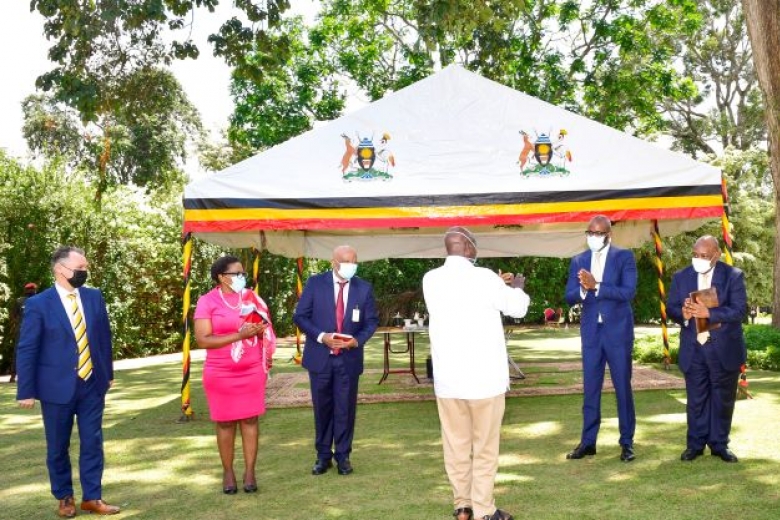 The strategy by telecom giant MTN Telecommunications Company of getting Ugandans involved as partners in its activities has been described as very important by President Yoweri Museveni who said it allows Ugandans and Africans to be partners in all the activities of the company.

“Localisation is very important. It removes nationalism in business where all people become partners,” he said

President Museveni congratulated the leadership of MTN for the strategy including that of the expansion of services to the rural areas as well as in business promotion.

The President was  meeting MTN Group Officials led by the Chairperson of the Board Mr. Mcebisi Hubert Jonas who called on him at State House Entebbe.

Other members of the group included the CEO of the company Mr. Ralph Mupita and the officials of MTN Mr. Yolanda Cuba, Mr. Wim Van Helleputte and Mr. Charles Mbire.

MTN Uganda recently announced its intention to proceed with an initial public offer (IPO) and subsequently list on the Uganda Securities Exchange (USE).

According to the telecom, this follows the requisite approval by the Capital Markets Authority and Uganda Securities Exchange for MTN Group to sell 20% of its shareholding in MTN Uganda to the public. MTN Group owns 96% of MTN Uganda.

The listing is in line with the Group’s strategic priority to create shared value, partly through ensuring broad-based ownership in its operating subsidiaries. It is also in line with the provisions of MTN Uganda’s NTO licence, which require its listing by end-June 2022.

The Chairperson of MTN Mr. Mcebisi informed President Yoweri Museveni that they have made tremendous progress in the localization strategy that will see Ugandans acquire shares as the company aims at ensuring that MTN is owned by the people of Uganda.

“The localization process has started to ensure that MTN is owned by Ugandans. The overall new strategy is that as a company, it is owned by Africans,” he said.

He further announced that key positions are currently manned by Ugandans including that of CEO MTN in South Sudan.

He also said that MTN is committed to stay in Uganda and is set to invest US$ 300 million in the next 3 years.

The Chairperson also promised to contribute vaccines against COVID-19 pandemic as well as roll out services to the people in rural areas.