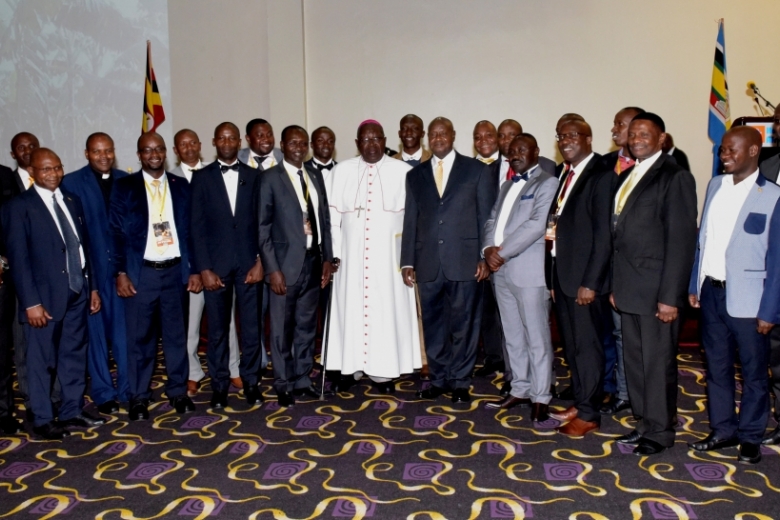 President Yoweri Museveni has commended Bushenyi-based Kitabi Seminary for providing him people who he described as honest in their service.

The President made the remarks yesterday evening at Hotel Africana in Kampala where, as chief guest, he launched the Kitabi Seminary Old Boys’ Association Cooperative Saving and Credit Society Ltd (KISOBA SACCO) and also led members of the association in raising funds for Kitabi Seminary sanitary project.

Kitabi Seminary has been in operation since 1935 having been started by missionaries of the White Fathers congregation to train and churn out Catholic Church priests mainly in the dioceses in Western Uganda.

“The old boys of Kitabi have always ended up being very good. I thank the seminary for providing me honest people to serve in different capacities. It is good that the White Fathers trained the people in Kitabi for the good of society,” the President said.

Mr. Museveni observed that the challenge today is the inability of the population to use the available resources for their development. He cited agriculture, industries, services and Information Communication technology (ICT) as the 4 main sectors that can be utilized for income generation. He noted that most of the people in the country are economically dormant and still locked up in subsistence farming.

“Sixty nine percent of the homesteads are engaged in subsistence farming. People have got land that they do not use to promote themselves. The NRM Government wants to transform them into practitioners of commercial agriculture,” he emphasized.

The President called on the people to engage in the production of food, tea or coffee, pasture and fruits in order to benefit from small pieces of land that they possess. He advised that crops such as tobacco and maize are low value products that can be left to large-scale landowners because those crops make big financial returns when cultivated on a large scale.

President Museveni further called on Kitabi Old Boys and the elite in general to guide the rest of wananchi in Uganda in lucrative production ventures saying that when people are productive, the country is assured of food security. He stressed that much as industries are vital in income generation, the country cannot have agriculture without industries. He observed that increased production of fruits, tea and dairy products would attract more industries in the country. He, at this juncture, pledged Government’s commitment to availing and increasing credit finance for industries through Uganda Development Bank. He was optimistic that the move would boost the agricultural sector.

The President also said that the community stands good opportunities of enhancing development in the rendering of such services as banking, hotels and transport. He further said there are more opportunities in the ICT sector through the use of business processing outsourcing (BPOs).

While thanking Kitabi Seminary Old Boys for supporting him and NRM during the last general elections, Mr. Museveni reminded urged them to sensitize the people over the vice of land fragmentation that has always been witnessed in several communities in the country after death of family heads. He called on wananchi to learn from Europeans who do not practice land fragmentation but consolidate it and only share proceeds accruing from their consolidated pieces of land. He informed his audience of the Government plans underway to rehabilitate the Ishaka- Katunguru road.

Mbarara Archdiocesan Prelate, the Most Rev. Paul Bakyenga, himself an OB of Kitabi Seminary, said the institution has got a focused community. Noting that the seminary’s main purpose is to train successors of priests, the Archbishop revealed that the spirit of self-giving was and still is incorporated into the students.

The Chairman of Kitabi Seminary Old Boys’ Association SACCO, Mr. Gilbert Gumoshabe, thanked President Museveni for accepting to launch the SACCO. He said that the SACCO members are committed to supporting production at the household level with a view to ensuring the struggle against household poverty.

KISOBA Chairman, Mr. Ubaldo Bamunoba, while noting that the seminary has produced eminent leaders, commended President Museveni for the support to the Association in many ways such as the on-going construction of the Millennium Conference Hall, among others. He also lauded him and the NRM Government for the construction of the Ishaka – Kagamba road, noting that the community in the area has benefited a lot from it.