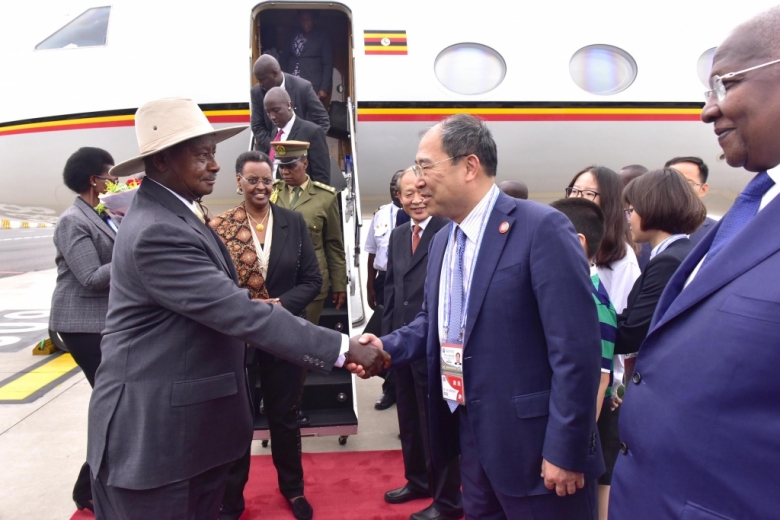 President Yoweri Museveni is in Beijing to attend the Forum on China-Africa Cooperation (FOCAC) summit that opens tomorrow, Monday the 3rdSeptember 2018.

The President, who is accompanied by his wife and Minister of Education and Sports, Mrs. Janet Museveni, was received at Beijing Capital International Airport by the Director of the Standing Committee of Beijing Municipal People’s Congress Zhang Qing.

Others at the Airport to receive him included the Minister of Foreign Affairs of Uganda Hon. Sam Kuteesa, the Ugandan Ambassador to China Hon. Crispus Kiyonga, the Ambassador of the Peoples Republic of China to Uganda Zheng Zhu Qiang and other senior government officials.

The two-day Summit that has attracted dozens of African Heads of State and Government is to discuss strategic partnership cooperation with China in areas of Trade, Infrastructure as well as Economic Development and Energy among others.

This is the 3rdHeads of State and Government summit bringing together leaders from the African continent and those from China, to take place after the first in 2006 that was held in Beijing, the second in South Africa in 2015 and now the 3rdin Beijing-China.

Meanwhile, President Yoweri Museveni upon arrival, held bilateral talks with his Kenyan counterpart, President Uhuru Kenyatta who called on him at his residence in Beijing.

The two leaders discussed issues of mutual interest between the 2 countries.