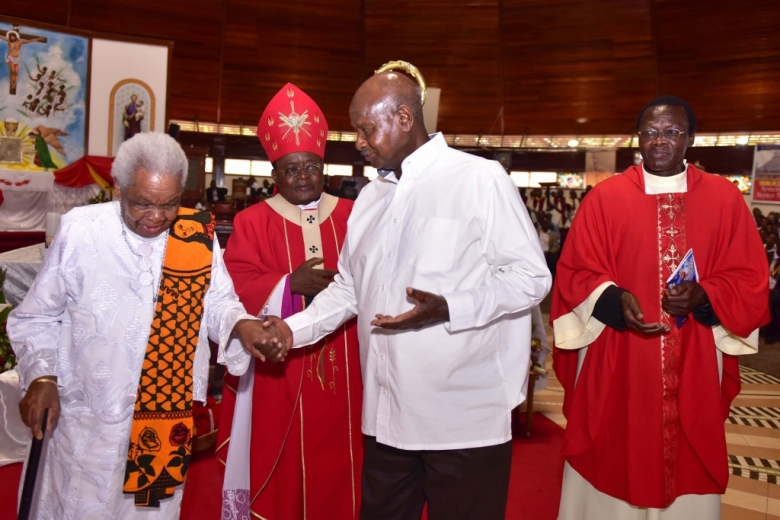 President Yoweri Museveni has said that Uganda will forever remember the contribution made by former President of Tanzania, the late Mwalimu Julius Nyerere, in the liberation of the country.

“By observing the 1stof June each year, we, the Uganda government with the support of the Catholic Church, are signifying our appreciation to Mwalimu,” he said.

The President was this morning among pilgrims from Tanzania led by Mama Maria Nyerere and are in the country for the Julius Nyerere Day that is observed on 1stJune and for the annual Uganda Martyrs’ Day celebrations to be held on Sunday 3rdJune 2018.

The Nyerere Day that was first started in Musoma Diocese in Tanzania has been set aside annually by the Government of Uganda to pray at Namugongo Basilica for the beatification of Mwalimu Julius Nyerere to Sainthood.

President Museveni described the late Mwalimu Nyerere as a devoted Catholic, patriot, and a Pan-Africanist. He noted that the former Tanzanian leader became a great African leader because he managed to unify the people of Tanzania, who are diverse in their ethnicity, by not following the line of sectarianism.

“Being a devoted person in any religion should not mean being sectarian. If Mwalimu had done that, he would not have managed Tanzania,” he observed.

The President, therefore, thanked Archbishop Cyprian Kizito Lwanga of Kampala Archdiocese, for allowing the devoted to officially hold prayers at the Uganda Martyrs’ Shrine in Namugongo for Mwalimu Nyerere. He noted that the prayers held annually at Namugongo will reinforce those of the Christians in Musoma where the whole process started.

Mr. Museveni told the congregation that Mama Maria is today continuing with the work started by the late Mwalimu Nyerere of unifying people through politics, by now promoting unity through the Church.

The President also pointed out that the linkages between the people of Tanzania and those of Uganda have, for long, existed as manifested by the similarities in culture and language. He added that even Mama Maria was only coming back home as she first had her Education at Nsuube in Uganda.

“We are, therefore, very happy to see that the Tanzanian pilgrims come every year to be with us as well as to pray to God to expedite the beatification of Mwalimu Nyerere,” he said.

President Museveni reiterated his gratitude to the people of Tanzania for supporting their brothers and sisters in Uganda in regaining their freedom. He said the Uganda Martyrs persevered in the fire and did not denounce their faith and similarly Nyerere was also in fire, as the plan during Amin’s regime, was to surround Tanzania and Zambia with hostile governments that could bring down the government of Tanzania.

“To support freedom fighters in Southern Africa and Uganda, was risky for Mwalimu and the people of Tanzania,” he noted.

The Archbishop of Kampala Archdiocese, the Most Rev. Dr. Cyprian Kizito Lwanga, who started his remarks by leading in the song‘Marching United in Christ’ said the visiting congregation from Tanzania and all other pilgrims to Namugongo, were marching together with the Martyrs because of our faith in God. He thanked President Museveni and the Government of Uganda for supporting Namugongo Basilica as well as declaring 3rdof June every year as a public holiday in commemoration of the Uganda Martyrs.

He urged Christians to remember God who gave the Martyrs the courage to die for their faith. He asked the congregation to pray through the intervention of the late Nyerere for miracles to occur in order to enhance the process of his beatification.

The Archbishop said that Nyerere was a great leader in Africa and a servant of God who deserves our remembrance and prayers for his beatification. He also thanked Mama Maria and the pilgrims from Tanzania for loving Uganda and the Uganda Martyrs by visiting the country.

The representative of the Government of Tanzania, Ms Mary Chiando, thanked President Museveni for gracing the occasion. She also thanked Archbishop Cyprian Kizito Lwanga for hosting the pilgrims from Tanzania adding that this was an opportunity for them to learn a lot about the faith of Uganda Martyrs.

The representative of Mama Maria Nyerere’s family, Rev. Sr. Eledina Micheal, described President Museveni as a true father of the people of Uganda and Tanzania because of his large heart.

Rev. Fr. Antonius Maria Mamsery, in a homily, said Mwalimu Nyerere served all countries in Africa selflessly especially in their liberation struggles. He added that Mwalimu Nyerere was a devoted Catholic who relied on divine intervention when faced with big challenges.

‘Nyerere never fought for only political freedom but also for the liberation of Christians and everyone in Tanzania and Africa in general,” he said.

Deputy Chief Justice, Justice Aliphonce Owiny Dolo and his wife, among others, attended the Mass.