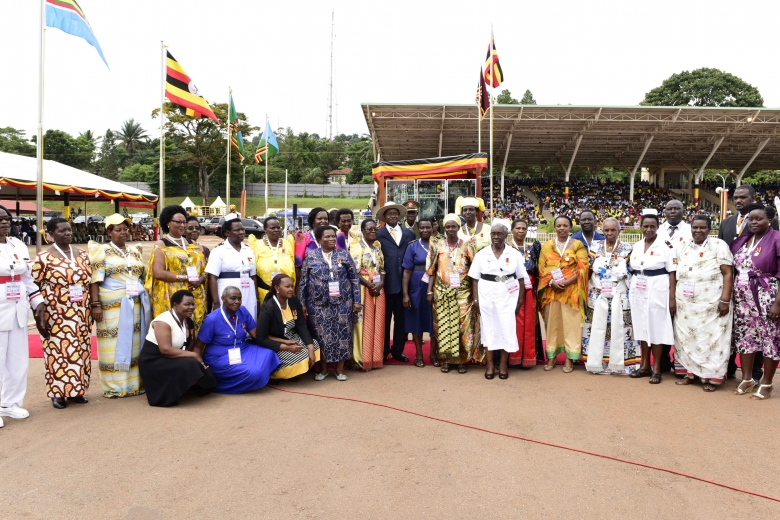 President Yoweri Museveni has assured the country of security. Speaking this afternoon during celebrations marking the annual International Women's Day held at the Independence Ceremonial Grounds at Kololo in Kampala, the President assured all the people in the country that no one can cause trouble in Uganda."Some people who were not informed about Uganda were saying there will be trouble here. There will be no trouble. Whoever wants to cause trouble should go to a less organized society," he said.Mr. Museveni, who was accompanied by the 1st Lady, Hon. Janet Museveni, encouraged business men and women to take advantage of the big East African market to eradicate poverty. He, therefore called on the people to go about their duties normally and exploit the regional market opportunities."The Republic of South Sudan has formally joined the East African Community. That means that East Africa is as big as India in land figures. Women and men who are engaged in business have no excuse because there is a big market in addition to other markets we have negotiated for," he said.Mr. Museveni added that government will invest more in the minerals industry in order to create more exports and jobs for Ugandans. He revealed that the Government is already reached advanced stages in getting investors in the minerals sector.President Museveni thanked the people of Sebei Sub-Region and of Amudat district in Karamoja Region in Eastern Uganda for supporting government efforts against female genital mutilation (FGM).During the cerebrations, President Museveni awarded 399 Golden Jubilee and Police Medals to various Ugandan women in recognition of their outstanding service and loyalty to the country. They included the late Joan Kagezi formerly Principal State Attorney who died last year; Vicky Kisarare Sserunkuma who is Head Teacher of Gayaza High School, Aisha Lubega, Head Teacher of Nabisunsa Girls’ School, Cotilda Kikomeko Nakate, Head Teacher of Trinity College Nabbingo, Mariam Ndagire, an artiste, Annet Nandujja, an entertainer and Susan Muwonge (motor rally sport) , among others.The Vice Chairperson of the National Women's Council, Helen Asamu and the Representative of the UN Women, Hodan Addou, commended the government of Uganda for playing a cardinal role in inclusive development.The Vice President, Edward Kiwanuka Ssekandi, Speaker of Parliament, Rebecca Kadaga, Deputy Chief Justice Steven Kavuma, Prime Minister Ruhakana Rugunda, Minister of Gender, Labour and Social Development Wilson Muruli Mukasa, Ambassadors and High commissioners to Uganda.