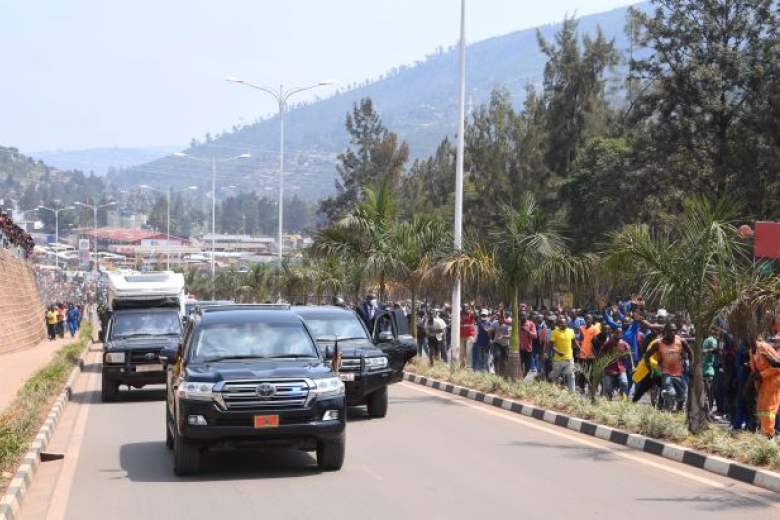 President Yoweri Museveni has today arrived in Rwanda’s Capital Kigali for a four day working visit during which he joins other heads of state for the ongoing Commonwealth Heads of Government Meeting (CHOGM).

The meeting is being held under the theme, “Delivering a Common Future: Connecting, Innovating, Transforming”

President Museveni who traveled by road from Uganda was received at the Gatuna One Stop Border Post by the Minister of Infrastructure of the Republic of Rwanda Eng. Erneste Nsabimana, Uganda’s High Commissioner to Rwanda H.E Maj. Gen (Rtd) Robert Rusoke, Governor of Northern Province Mr. Danielle Nyirarujero, Mayor of Gicumbi Mr. Emmanuel Nzabonimpa, Deputy Head of Mission Ms. Anne Katusiime, Defence Attaché at the High Commission of the Republic of Uganda in Rwanda Maj. Gen. Emmanuel Burundi Nyamunywanisa and Col.Deo Rusanganwa, Brigade Commander 501. Hundreds of people lined the streets of Kigali to receive him and almost blocked roads.

The President is due to attend the Commonwealth Business Forum Heads of Government and Business Leaders Roundtable at the Intare Conference Arena. Later he will host various bilateral meetings at his residency.

Leaders of Commonwealth countries meet every two years for the Commonwealth Heads of Government Meeting (CHOGM), hosted by different member countries on a rotating basis. Since 1971, a total of 24 meetings have been held including in Uganda in 2007 hosted by President Yoweri Kaguta Museveni, with the most recent being in the UK in 2018.

CHOGM currently going on and hosted by H.E Paul Kagame was due to take place in June 2020 but was postponed twice due to the COVID-19 pandemic.

Commonwealth Heads of Government Meeting 2022 is now taking place in Kigali, Rwanda. The official opening of CHOGM takes place on Friday 24 June and will be followed by the main high-level meetings of Heads on Friday 24 to Saturday 25 June. They are preceded by four Forums, ministerial meetings, side events and other activities.