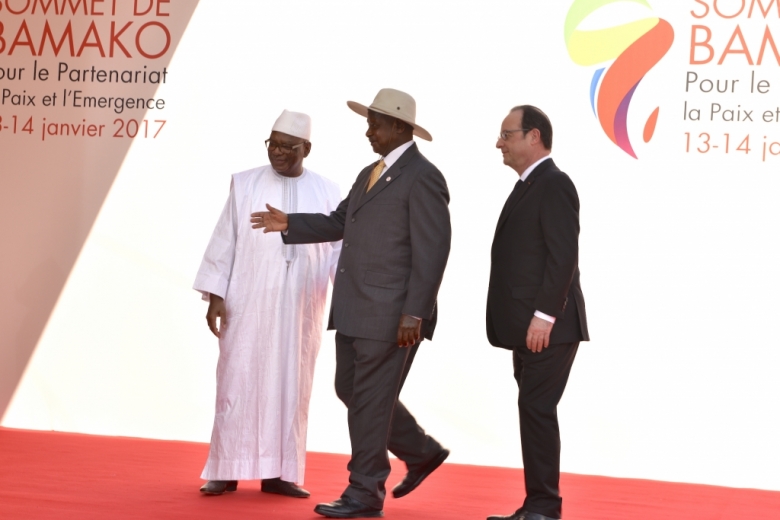 President Yoweri Museveni has called on African countries to oppose foreign intervention in the continent if it lacks approval of appropriate and legitimate African bodies.

Delivering a keynote address at the France-Africa Summit in Bamako-Mali on Saturday, President Museveni said unilateral actions by international forces without the permission of the African Union or a legitimate national force is imperialistic and must be rejected completely.

The President saluted the recent decision by African countries (Senegal, Angola and Egypt) to vote against a resolution aimed at imposing sanctions on South Sudan.

“The Security Council and the UN in general are becoming famous in Africa for being terrorism conservators and vacuum creators.  In Congo (DRC), the UN has been promoting dictatorship (Mobutu vs Lumumba) and conserving terrorism for the last 56 years,” the President said in his presentation at the two-day summit attended by over 30 African leaders under the theme “Partnership, Peace and Emergence”.

The President, however, said this does not preclude sovereign governments having bilateral arrangements with non-African partners.

On peace and security in Africa and in other parts of the world, President Museveni said the causes of these endless conflicts and upheavals are ideological.

He said the political elite, many of them acting on behalf of foreign interests, have failed to determine what is more important on interest or identity and he confirms interests as the most important compared to identity.

“The correct answer is that interests are always more important than identity. However, sometimes, identity is also important ─ not to the exclusion of interests but important enough to become a main problem”

Mr. Museveni pointed out 10 strategic bottlenecks including the pseudo-ideology of sectarianism as hindrances to peace and security in Africa.

“That is why my ideology is patriotism within Uganda (as opposed to sectarianism) and Pan-Africanism when it comes to Africa. A united East Africa enables us to negotiate better with the rest of the world”

He said that sectarian ideologies are inimical to the prosperity of the people of Africa.

The conference had earlier officially opened with host President Ibrahim Boubacar Keita thanking his counterparts for hounouring the invitation while co-host, President Francois Hollande of France, said those battling jihad in Africa and the Middle East were like France and part of "the same fight" against extremism.

Hollande said that the fight against extremists, is a struggle for everyone to improve governance and the migrant crisis in Africa and the world as a whole.