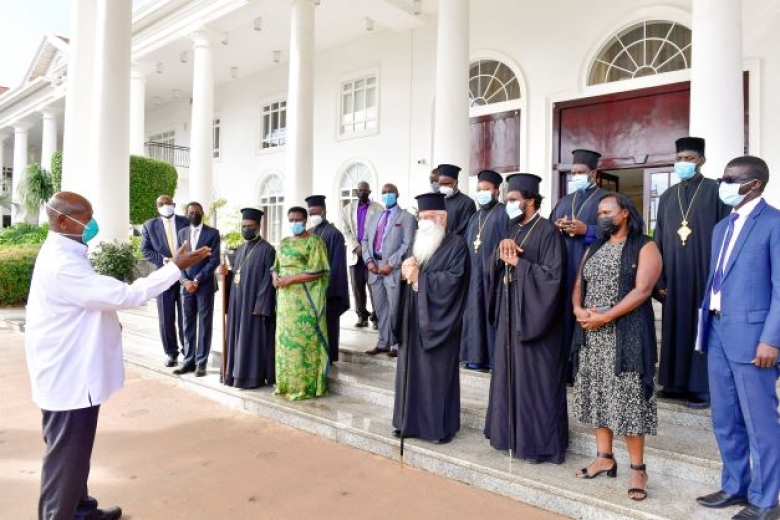 The Pope of the Coptic Orthodox Patriarchate of Alexandria, Pope Tawadros II has sent a special message to President Yoweri Museveni and the people of Uganda and hailed them for the support extended to them following the demise of  the late  Metropolitan Jonah Lwanga , who served as Archbishop of Kampala and Exarch of All Uganda in the Uganda Orthodox Church. Lwanga who was also the Metropolitan of the Metropolis of  Kampala and All Uganda, in Central Africa under the Eastern Orthodox Church of Alexandria, died early this month.

The message was delivered by a delegation of Orthodox clerics who paid a courtesy call on the President at State House Entebbe yesterday.

The delegation was led by His Eminence Metropolitan Makarios Archbishop of Nairobi in Kenya who is also the caretakercare taker of the Orthodox Church in Uganda.

Other members of the delegation included among others His Eminence Metropolitan Jeromos Muzei Archbishop of Mwanza in Tanzania, His Grace Bishop Silvestros Kizitu of Gulu and Eastern Uganda, Reverend Father Mukiibi of Metropolis of Burundi and Rwanda, Reverend Father Kibuuka John the Dean of the Cathedral and Rev. Emmanuel Mbaire from Athens Greece who accompanied the body of the late Archbishop Lwanga..

They extended warm greetings from the Orthodox Pope and Patriarch of Alexandria and all Africa Theodoros the 2nd to President Museveni and the people of Uganda.

The Clerics noted that the Orthodox Church enjoys cordial relationship with the NRM government and deeply shares the same ideology.

“We are looking forward to  possible ways of strengthening these relations further,” they said.

They commended the President for the huge support given to their institution following the death of Archbishop Yona Lwanga who succumbed recently to COVID-19 in Athens Greece.

“Your Excellency we come here with much love and appreciation to you for having stood with us in these difficult days after the loss of our Metropolitan Yona Lwanga,” their spokesperson His Grace Bishop Silvestros Kizitu of Gulu and Eastern Uganda said.

The clerics in their submission further commended the team that was delegated by President Museveni to organize burial arrangements and included the Vice President H.E. Jessica Alupo, the ICT Minister Dr. Chris Baryomunsi and the A. General. Hon. Kiryowa.

“The team executed their role very well and we appreciate this as the Orthodox Church,” they said.

The President acknowledged their appreciation and conveyed his profound condolences to the Orthodox Church, especially the family upon the loss of Archbishop Yona Lwanga.

“First of all I am very sorry for the death of our brother Yona Lwanga. It was a big loss,” he condoled.

The President pledged to support the church in its development programs.

Later His Eminence Metropolitan Makarios prayed to God to give President Museveni more wisdom and knowledge to lead the country for the good of the people.

A memorial service for the late Yona Lwanga will be held on the 17th of October 2021 and the Orthodox Pope Tawadros II is expected to attend.