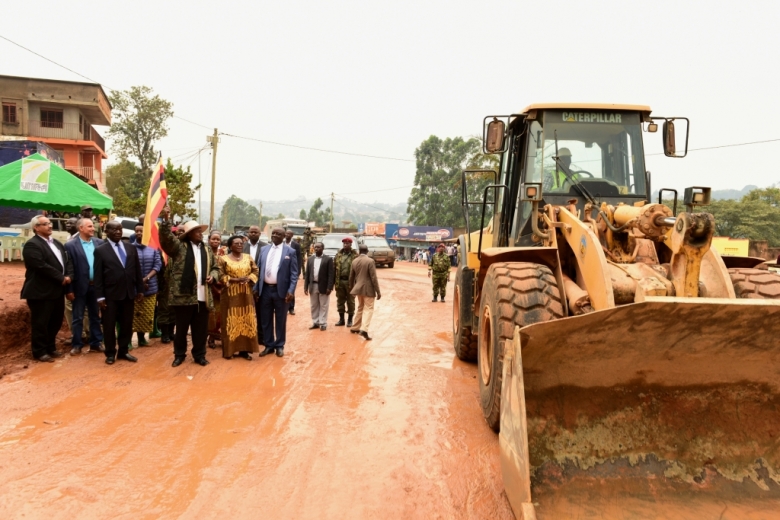 Officiated at the ground breaking ceremony of the 41km long Masaka- Bukakata road. The road runs from Nyendo Junction in Masaka Town, passing through the Luvule and Kayugi trading centres to Bukakata which is on the shores of Lake Victoria. The road also includes the 5km link to Lambu landing site.

I am happy that we are fulfilling the pledges made in our re-election manifesto while also advancing Government’s strategy for poverty eradication, economic development and regional integration.

The NRM Government has put a lot of emphasis on infrastructure development like electricity and roads and I want to assure you that more roads will be upgraded to tarmac.

In the month of September 2018, we procured Contractors for Masaka- Bukakata Road, Rukungiri- Kihihi- Ishasha Road and the Kampala Fly Over which is at the heart of the city.

In addition to the numerous direct economic benefits associated with the improvement of transport infrastructure, the improved roads will also be of great importance for the delivery of social services, be in health care or education.

By inducing economic development and facilitating trade, a functional road network contributes to the integration of Uganda’s economy into the regional and world market, which is the precondition for sustainable economic growth and development.

The roads are good but house hold income is crucial. The government is playing its role like electrification, roads, peace but it is your job to take care of your home and avoid getting HIV.

You cannot bring a mattress to the tarmacked road and sleep on it. You go back home to find the same problems waiting for you. The children have no blankets and you have to pay bills. Therefore, I encourage you to do commercial and calculative agriculture. I encourage to embrace the four acre-model. This can help you get a lot of money even up to 100million.

Meanwhile, in Bukakata- Nabugabo, we have military land that we used to test military ammunition and bombs. The army got another land so I now want to use this specific one to build industries. Those who are on that land will be compensated such that they move out and we make it an industrial park like we did in Namanve. That way we open up more employment opportunities.