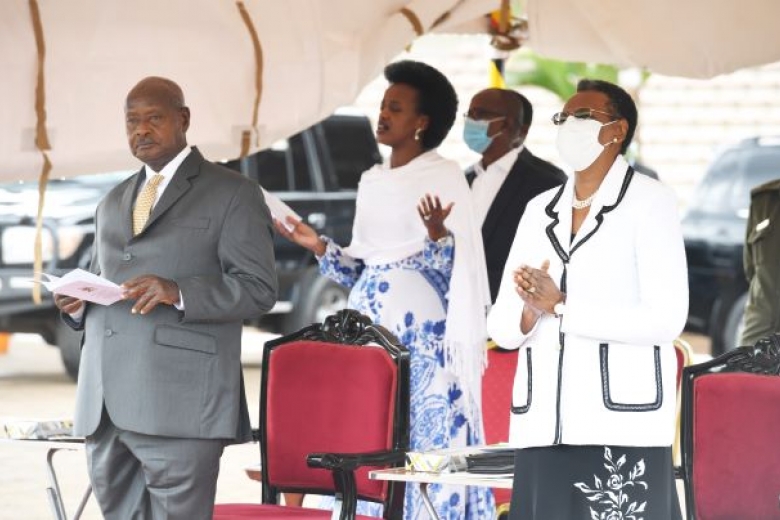 President Yoweri Museveni joined Christians whom he described as prayer warriors for a thanks giving service to thank God for a peaceful election and great victory following January general elections.

“I thank all of you for coming here where the inauguration is going to take place to ask God’s blessing for this site and occasion and thank God for all the things’ he has given us in the past,” he said.

The President was speaking during the National Thanksgiving prayers for the peaceful and victorious elections process organised by Pastor Patience Rwabwogo of Convenant Nations Chruch. The prayers held yesterday at Kololo Ceremonial Grounds were also attended by the First Lady and Minister of Education and Sports Janet Kataha Museveni. The sermon delivered by Bishop Joshua Lwere, Pastors Robert Kayanja and Precious Magezi among others.

The President was happy that the Christians remembered the parable of the lepers.

“I can see that you still remember the bible. Because there is the parable of the 10 lepers. They were healed but 9 did not come back to thank God. There is one leper who has come back. When you prayed before the elections and God blessed us, I am one of the ten lepers who came back to thank God,” he said.

The President said God has interceded for him many times including in 1973 when he, together with his comrade Eriya Kategaya survived death.

“Let me use this occasion to say yes, we have been fighting for a long time, making our own individual inputs, but there are many incidences where you could say this was really Gods’ work,” he said. He said he had come from Tanzania and infiltrated the country to fight Idi Amin and had travelled to Awere in Gulu with Kategaya to meet some Acholi former soldiers 60 miles East of Gulu.

After their discussion, their host wanted him to meet a former colleague called Latigo but he declined. For some reason, his host took down their vehicle number plate. However, as the returned to Kampala, they knocked a sheep near Palenga Primary school. “Kategaya knocked a sheep. The radiator was damaged. We pushed it to behind teachers’ house. We got alternative transport and arrived in Kampala at 2am. I was dropped near Mulago and Kategya was staying in new flats new Bat Valley. Kategaya's gateman told him that somebody came with a torch, climbed over the fence, torched where his car parks when they didn’t find it went away. God had brought the sheep. The car was not there,” he said.

The President said it is now 56 years since they got involved in these struggles.

“My witness is that whatever you are doing. Avoid evil. When you avoid evil God is happy with whatever you are doing, evil involving stealing money, killing people, doing bad things etc. I try my best to avoid evil. I always resist temptations by people who want to take short cuts. Part of sin are mistakes caused by people who want short cuts. They are essentially lazy, don’t want to be patient, don’t want to work for a long time. They think if you take shortcuts, you will get good results faster but that shortcut is dangerous. It will make you compromised and you will no longer have the cleanliness within you to fight evil,” he said.

The President commended Christians for speaking with one voice in the fight against poverty and being examples of poverty eradication rather than participants in poverty.

“My family is a difficult family because we are traditional people, very arrogant. You can imagine that the Christianity religion came to Uganda in 1877 but the first person to go into Church was my father and mother plus me when I was young two and a half years, following them in 1947. From 1877 to 1947 not a single member of our family had gone to church. All lived and died and nobody went to church. Almost 67 years. Only my father and mother went to Church to become Christians,” he said.

The President said after 150 years of the Church, recently Patience came. “Now I have a first pastor in my family. 150 years after the Church came. I thank Patience for this passion,” he said.

The First Lady Janet Museveni in her prayer said many believers have fasted and prayed over the last months, some traversed the country to pray in different locations.

“The spiritual watchmen and intercessors in our nation spent nights in prayer and watching before the Lord. We have all been calling on Your Name to have mercy on Uganda, to heal our land of the plague of covid-19 and to carry us safely through the campaign and election season,” she said.

In her prayer, the First Lady called on God to be our Chief Guest on our inauguration day.

“We pray that it will please you Lord to be our Chief Guest on our inauguration day, that You will take the highest seat of honour on that day, we give You pre-eminence and all the glory as a people. We invite Your Presence to come and be enthroned amongst us always so that other nations will know that we are a people whose God is the LORD,” she prayed.

According to Pastor Patience Rwabwogo Museveni who organized the prayers, the Thanksgiving service was in honour of a vow the Christians made to God before the elections.

“During the campaign and election season, there was a lot of prayer and intercession for the nation around the country. A few days before the election, a group of believers met here in Kololo and spent three days praying and interceding, repenting and petitioning the Lord for a peaceful and victorious election. They made a vow that if God gives us all these things, we will come back and give thanks to God. We are here to fulfil that vow. If you make a vow to the Lord, you must full fill it,” she said.