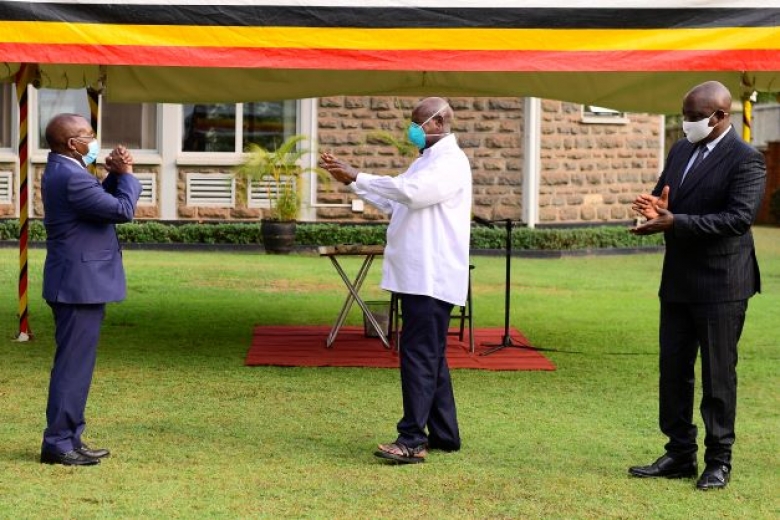 President Yoweri Museveni has assured the people of Uganda and the Democratic republic of Congo of total peace after the two countries launched joint operations to flush out the Allied Democratic Forces from Eastern Congo.

The President was addressing a delegation of security chiefs from the Democratic Republic of Congo (DRC) led by their Minister in charge of National Defence Unit Dr. Gilbert Kabanda Kurhenga at State Lodge Nakasero.

“We should really work together and finish this problem. This was phase one. We are now ready for phase two. It is very easy for us to destroy those groups,” Museveni said.

Since then, the two forces have captured several camps including the famous Kambi Ya Yua and secured major routes in Eastern Congo to enable ground battle teams to pursue ADF rebels, who have fled to the thick forests.

To avoid back and forth attacks between the rebels and the joint forces, President Museveni advised the government of DRC to intensify regional and local security mechanisms to avoid further insurgencies especially in areas already secured by the joint forces.

“Our experience here is that, once you attack concentrations of the terrorists and they see that you have the capacity, they can’t challenge you army to army, they now go to pure terrorism. They break into small groups and they go to attack villagers,” Museveni said

He said these will later prevent pockets of terrorism where rebels return to attack villagers and kill people ending up discrediting government.

“That’s why for us, we add the third force. These are called local defence units per village where there’s a threat. And they don’t have to be many. When the other people come to kill villagers, they will be there to repulse them,” he said.

The Chief of Defence Forces Gen Wilson Mbasu Mbadi briefed the President about the progress of the on-going Operation Shuja aimed at pacifying Eastern Congo, the on-going road construction projects on the Kasindi - Beni - Butembo and Bunagana - Rutshuru to facilitate easy movement of troops and other strategic decisions made between the forces of the two countries.

The Minister in Charge of National Defence of DRC Dr. Gilbert Kabanda Kurhenga thanked President Museveni for his role in ensuring peace in the region.

At the same meeting Ugandan Minister for Defence and Veteran Affairs Vincent Bamulangaki Ssempijja and his counterpart from the Democratic Republic of Congo (DRC) Gilbert Kurhenga Kabanda signed the bilateral general agreement on Defence cooperation that will ensure joint operations between the armies of both countries.

The delegation on the Ugandan side included among others; Minister Vincent Sempijja, CDF Gen Wilson Mbasu Mbadi and Major General Richard Prit Olum who serves as Uganda's military attaché at the Ugandan embassy in the Democratic Republic of the Congo, based in Kinshasa

Operation Shujaa is being implemented following a Memorandum of Understanding between the Government of Uganda and their DRC counterparts to conduct joint operations for the eradication of ADF and other foreign-armed groups in the eastern part of DRC.