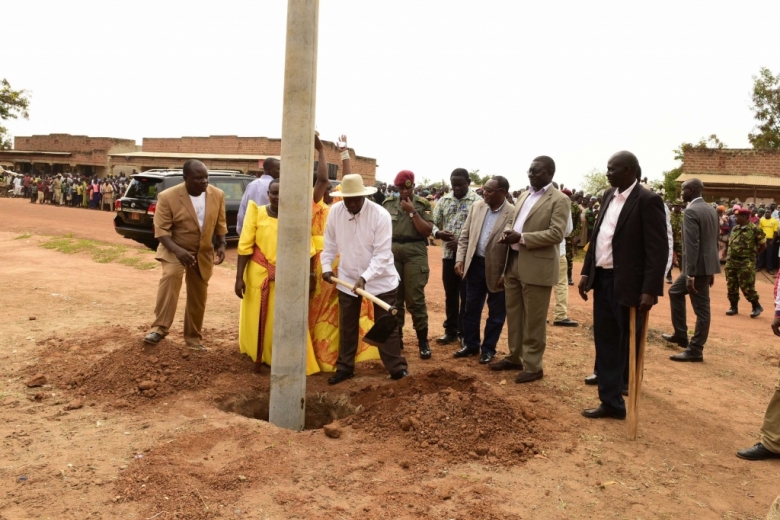 President Yoweri Museveni has said that if development is to take place, it needs a lot of planning and prioritizing. He said that the National Resistance Movement (NRM) is a government that plans and prioritizes in the execution of its roles.

Mr. Museveni explained that originally the problem of Teso Sub-Region was insecurity caused by rebel such groups like Joseph Kony’s Lord’s Resistance Army (LRA) and cattle rustlers but through planning, he observed, the Uganda People’s Defence Forces (UPDF) was able to defeat the rebels and cattle rustlers and bring peace to the region.

The President said that although there are few crimes still being committed, the Movement Government is in the process of securing cameras that will be installed along roads to help the Uganda Police apprehend criminals. He added that after ensuring peace in the Teso Sub-Region, government started planning for development projects in that Sub-Region such as roads, electricity and water supply. He said that the government began by constructing roads to all the border points of Uganda and is still committed to the construction of more roads in the Teso area such as: Tirinyi-Pallisa-Mukongoro-Kumi-Kanyum road; Kumi-Ngora-Agu-Serere-Kagwara road and Soroti-Amuria-Obalanga-Achan-pi up to Abim road.

Turning to the health sector, the President said that the NRM government’s biggest health effort to succeed has been immunization.

“We started with 8 vaccines but are now on 13 vaccines including the vaccine against Hepatitis B,” he said. He said that many of the diseases would be blocked forever if people ensured proper hygiene, good nutrition, slept under treated mosquito nets and got immunized.

“After blocking diseases by immunization, if the chairman and the district health officer could promote proper hygiene, ensure proper construction of latrines and washing of hands after visiting the latrines, most of the diseases would be eliminated,” he said.

President Museveni also cautioned the public against engaging in promiscuous behaviour and alcoholism noting that indulgence in them would make one stand a risk of catching diseases such as HIV/AIDS.

“I have managed to make it to 73 years of age because I do not drink alcohol. I have been here for the last 30 years and all this time you have never heard that Museveni is sick and is in hospital. I do not have time for sickness,” he said.

The President told the people of Ngora in particular and Uganda in general that although the NRM Government is committed to the construction of hospitals and health centres, the priority should be avoiding and preventing sickness.
“Health is wealth. When you are healthy you can do anything that you want to do,” he said.

At the ceremony the President also passed out 5,600 graduates from the Jacqueline Amongi Development Foundation Skills and Incubation Centre. The graduates were trained in tailoring, carpentry, piggery, apiculture, poultry and liquid soap making, among others.

President Museveni commended Hon. Amongi for equipping her constituents with both agricultural and non-agricultural skills. He stressed that it is important to equip people with other skills other than the agricultural ones because it is not wise to have four generations of a family on four acres of land doing agriculture.

Earlier the President laid a foundation stone at the construction site of the Jacqueline Amongi Development Foundation Skills and Incubation Centre. The Centre aims at training people in the region in modern farming and other skills.

Hon. Amongi, on her part, thanked President Museveni and the NRM Government for securing peace in the country and also for the Operation Wealth Creation programme. She noted that the rogramme has enabled her constituents to improve their household incomes. “The people of Ngora have decided not to be just talkers but doers,” she said.

She thanked President Museveni for sponsoring under-privileged people in the district to acquire education. She urged him to continue the scholarship program. A total of 47 people were sponsored and 37 have since then graduated as doctors, among other professionals. President Museveni donated Shs.50 million to the different groups.

Earlier, President Museveni performed a groundbreaking ceremony for the Ngora-Nyero-Kumi water supply and sanitation project at Agu village. The Shs. 24.5 billion project is one of the water supply systems constructed under the Water Management and Development Project (WMDP).

The project commenced in May this year and is being undertaken by M/s China Geo-Engineering. It is expected to be completed by the end of June in 2018.

According to Mr. Dominic Kavutse, who is Commissioner of Urban Water and Sewage Department, at its completion, the project is expected supply 10 million litres of water per day. The project will draw water from River Ago.

Sponsored by the World Bank, the project is being implemented by the Government of Uganda through Ministry of Water and Environment and National Water and Sewage Corporation.

President Museveni noted that the water project would go a long way to support government efforts of irrigation in order to ensure that farmers grow crops through out the year.