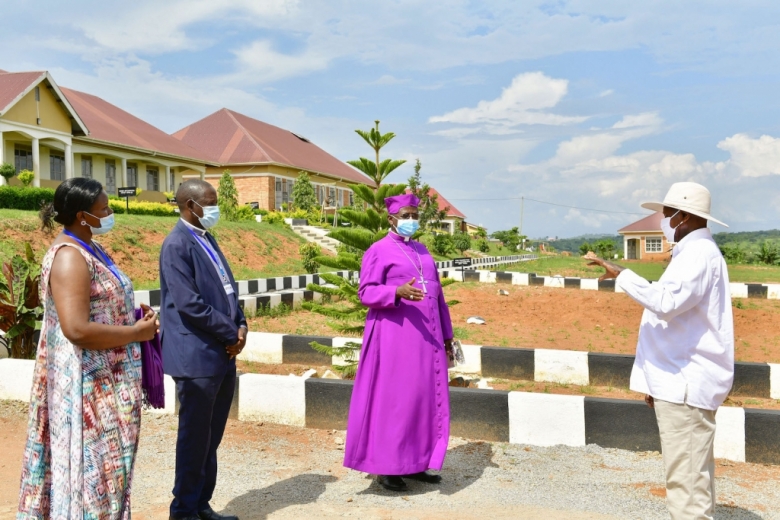 President Yoweri Museveni has said since the NRM government came to power, there has been a ray of hope in the agriculture sector that has seen surplus in production.

“Ugandans have been awakened. Most of the agriculture produce like matooke, coffee, maize…and even minerals like cement are being produced in big quantities. Everything is produced in surplus,” he said.

The President was  Sunday 18, addressing a scientific congregation of North Ankole Diocese in Kiruhura district during which he performed the ground breaking ceremony of a proposed a community hospital worth 7 billion shillings located at the diocese headquarters.

The first phase of the construction will comprise the Out-Patient wing and administration block at the tune of 1.6 billion shillings.

During the ceremony, the president also toured other projects including; Rushere Primary School, Rushere Bishops Girls’ School, a complex guesthouse with conference hall and spacious outdoor area for parties, diary farm and other income generating activities for the diocese.

The President said this agriculture development has been boosted by the NRM policy of mass mobilization and patriotism.

On the issue of politics, President Museveni urged Ugandans to avoid internal political fights, bribery, forgery and flouting election processes. He called on them to embrace pan-Africanism, economic growth and promote an integrated market to exploit available natural resources.

The President said that holding a free and fair election has been important because it breeds sanity in society, adding that good leadership is symbolized by giving people focused guidance.

Mr. Museveni advised the people that it would be wise to excavate sizeable valley dams to address the problem of scarce water for sustainable crop irrigation and for animal use.

The President was happy to note that the people have transformed their way of life by shifting away from subsistence farming, nomadism and are improving on health and education sectors thereby boosting their life expectancy. He advised them against the agricultural practices of land fragmentation.

He thanked Bishop Namanya Steven for leading by example and following the teachings of Jesus and also emulating the NRM objectives of prioritizing economic empowerment.

Bishop Namanya said that among other development projects in the diocese, the schools and the hospital are crucial citing an increase in population.

“The proposed bigger health facility will enable us meets the demands of our increasing population and also support the existing eight health centers,’’ he said.

The Bishop thanked the First Lady and Minister of Education and Sports Janet K. Museveni for supporting the diocese in its efforts to refurbish the church based primary school to meet the required standards.