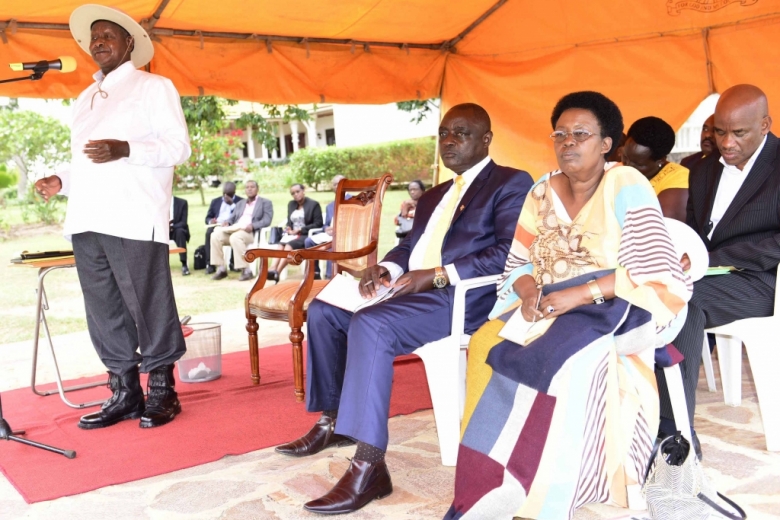 President Yoweri Museveni has strongly advised dairy farmers in the country to ensure proper feeding of their animals during dry seasons by cutting and storing grass that sprouts during the rainy season. The stored grass, he said, can be used in form of hay to feed their herds at the height of the dry spells to ensure more milk yields and improved quality of the animals.

“I have called you today to talk about 2 serious issues that can disorganize dairy farmers; under-feeding cattle during dry seasons and rearing cows without doing calculations,” he said.

The President made the remarks last evening at a meeting he convened at his country home in Rwakitura, Kiruhuura district. The meeting drew cattle farmers from the cattle corridor in the country.

While thanking dairy farmers for shifting from keeping cattle in a traditional way to commercial farming, the President urged them to maintain the production of milk to satisfy the available industries that are now adding value to the product by cutting and storing grass during rainy seasons in preparation for feeding their animals during dry seasons.

He informed his guests that government is going to enhance pasture seed development at Namulonge Agricultural Research Institute so that when the pasture is planted on people’s farms, it will improve animal feeds.

On the issue of animal diseases, including the menace of ticks that have now become resistant to drugs, President Museveni assured farmers in Kiruhuura district that mechanisms have been put in place to purchase chemicals and build a laboratory in the area that will help diagnose diseases affecting animals. He observed that the provision of correct drugs to be used in treating cattle as well as eradicating ticks from the area is an important aspect in ensuring healthy animals.

Mr. Museveni assured farmers that the sale of animal drugs will be done by farmers themselves through one knowledgeable agent. He instructed the Minister of Agriculture, Animal Industry and Fisheries, Hon. Vincent Ssempijja Bamulangaki, to design a statutory instrument that will identify agents to handle animal drug sales.

The President advised cattle farmers to paddock their farms and keep cows that yield at least 20 litres of milk a day and sell off those cows that are not productive.