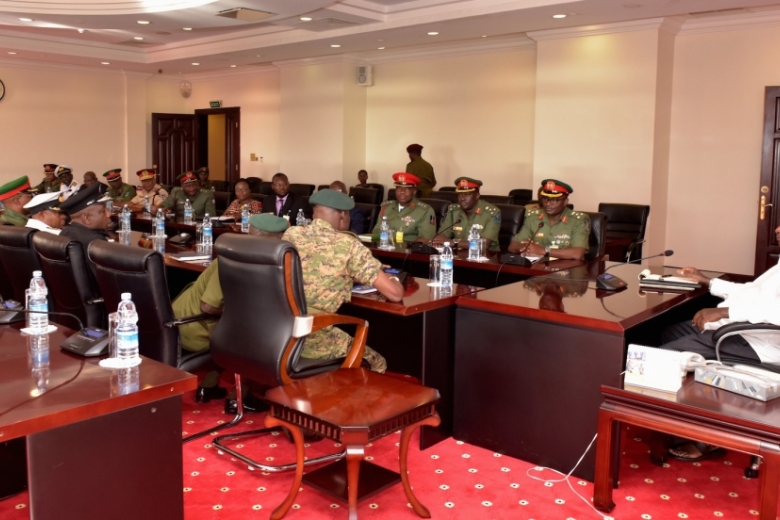 President Yoweri Museveni has told a delegation of Army Officers from the Nigerian Defence Force College that to achieve national security, African countries must root for and embrace patriotism and pan-Africanism so that African societies are enabled to undergo socio-economic transformation and the realization of democracy.

The President was addressing Nigerian Army Officers, led by Brigadier General Bolaji Nicodemus Salami, who called on him yesterday at State House, Entebbe. The Nigerian Army delegation was seeking guidance and enlightenment from the President on how Uganda has been able to handle matters of counter-insurgency and national security.

President Museveni told his guests that national security must be approached by dealing with the issue of the ideology of the country and its institutions. He noted that ideology ought to be promoted in society whereby politicians begin by concentrating on the interests of the people rather than on identity, which, he said, can cause a crisis.

"Interests don't always coincide with identity. In the history of Uganda, Political Parties were based on religion. The Democratic Party [DP] was for Catholics; Uganda People's Congress [UPC] was for Protestants. This resulted in unstable politics. We had a fragmented political system and these groups were not talking of interests of the people but identity. Hence we formed a students’ movement to challenge them and advocate for people's interests that had to be based on their prosperity. When people come to my shop, I don’t ask about tribe or religion. I am interested in selling to them and they giving me money," he said.

Turning to socio-economic transformation, the President explained to his visitors that if society does not undergo metamorphosis it is bound to be in a crisis.

"If you go to France, society there has changed. Peasants and aristocrats are no longer there. You find only the middle and skilled working classes because the society has been metarmophosized. If there is no change, there can be a big problem as the population of the country keeps increasing," said Mr. Museveni.

Talking about some of the ways to combat insurgency in a nation, the President stressed that the formation of zonal forces that stay in the area in order to guard the population, is an important aspect. He also noted that mobile forces must be formed, as has been the case in Somalia to hunt and carry out intelligence work. He reiterated that combined forces on both land and air have to be well equipped with strong ammunition and monitoring tools in order to locate and fight terrorists.

President Museveni also emphasized the need for discipline in the Army in order to ensure that they enlist the cooperation and confidence of the civilian population.

"We had a code in the bush. If you killed a person, we would shoot you where you killed the person such that others learn," he said.

He informed the delegation that punishments meted out to those who have misconducted themselves in the Army must be transparent like it is with public trials.

In their submission, the visiting Nigerian Army delegation expressed their appreciation to President Museveni for the elaborate and clear lecture. The delegation extended an invitation to him to go to Nigeria to deliver a lecture to their colleagues so that he shares with them the vast knowledge that he commands on the subject matter of national security and counter-insurgency