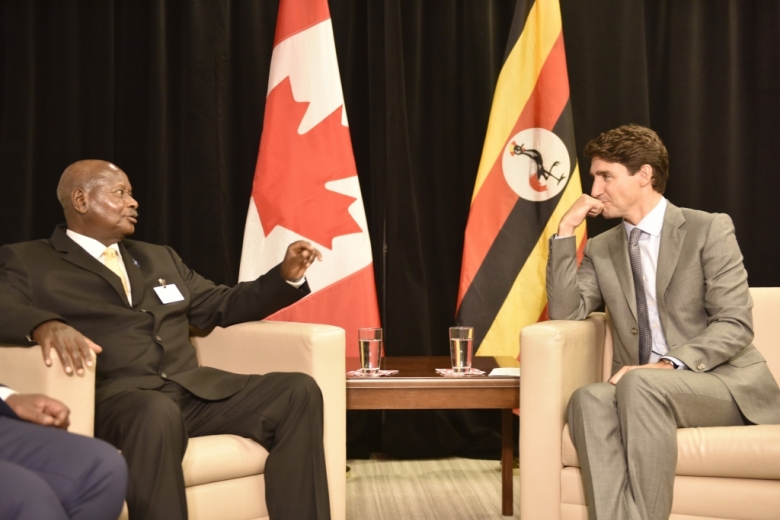 Determined to realize Uganda’s goal to fast-track initiative on ending HIV/AIDS in Uganda by 2030, President Museveni told a high level meeting on AIDS organized by UNAIDS and Co-hosted by Uganda that with research, prevention and experience it is possible to end AIDS in its totality.

“Your Excellences, I have beeninteracting with our experts from the Ministry of Health, UNAIDS and other health partners about HIV transmission and prevention. Using lessons from our own experience in Uganda, we are now convinced that it is possible to eliminate HIV/AIDS in its totality.  As part of this commitment, we agreed on ambitious global and national Fast Track targets for ending AIDS,” the President said, adding “We are in a better position because we now clearly know its mode of transmission, availability of anti-retroviral therapy with an improved outcome and advanced research that has been able to answer most questions.

The President said research has shown that once you are on treatment, there is a reduced chance of spreading the HIV infection. “For this reason, I invited you to address these challenges that face our countries and find means of how we can further strengthen our efforts,” he said.

The President who is accompanied by the First Lady Janet Kataaha Museveni is in New York for the 72nd United Nations General Assembly.

In June this year President Museveni launched the “The Presidential Fast-track Initiative on ending HIV & AIDS in Uganda by 2030. This was the first initiative in Africa and the entire world.

President Museveni said that he first came to know about HIV/AIDS during the liberation war when one of his soldiers got sick and died after the doctors failed to find out what he was suffering from.

President Museveni said that he when he captured power and sent some army officers to Cuba for training, Fidel Castrol told him about a disease that most of the officers who had been sent for training had been found with.

“Over 60 soldiers were sent to Cuba for training and 18 of these were found to be HIV positive,” he said.

The President said that this made him to pick interest in the disease and find out how it was spread. “I found out that AIDS was spread through unprotected sex, blood transfusion, mother to child and using unsterilized sharp instruments,” he said.

President Museveni said that by then the AIDS prevalence in some areas in Uganda was at 30% and at the national level 18%.

The President said that the government adopted the ABC (abstinence, being faithful and use of condoms) method to sensitize and prevent the spread of HIV/AIDS which helped lower the Prevalence rate.

Mr. Museveni said that with the introduction of the antiretroviral the world is better placed to fight the HIV/AIDS pandemic.

The President emphasized the role of the family in the fight against AIDS.

“I must emphasize the role of the family in the fight against AIDS. Talk to your children, this is because the first relationship a child has is with the parents. We need to talk to our children about AIDS,” he said.

The President of Guinea who is also the Africa Union (AU) Chairperson Alpha Condé said that the AU was committed to ending AIDS on the African continent. He said the body had launched a campaign to hire 2 million health workers to provide health services to AIDS patients. “It is very important to have people who can provide health care to AIDS patients,” he said.

Ms. Jacquelyne Alesi of the Uganda Network for People Living with HIV and French singer and AIDS activist Madame Line Renaud called for more open mindness about HIV and an end to criminalization and discrimination of people with HIV and fulfillment of pledges of funding.

Mr. Michel Sidibé commended the countries that have increased funding towards the fight against HIV/AIDS.

the Trump administration was deeply committed to the global HIV/AIDS response. She announced the release of the United States PEPFAR Strategy for accelerating HIV/AIDS Epidemic Control 2017-2020.