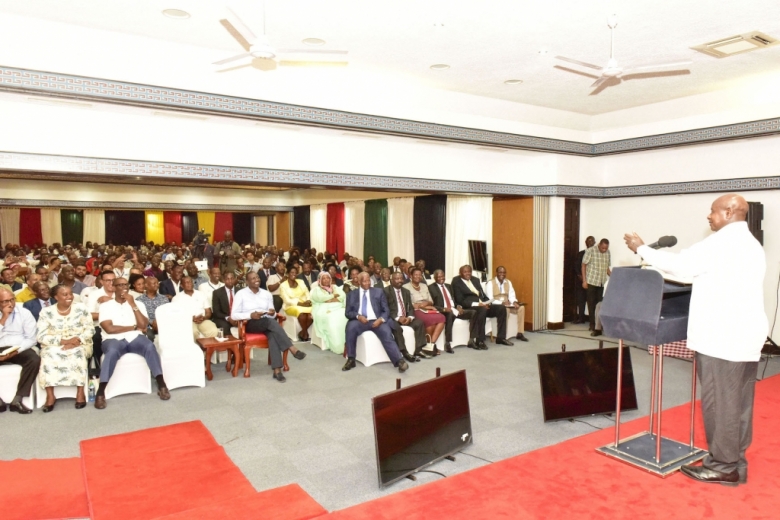 Nations can only get rich if they create conditions conducive enough for the private sector to thrive, President Museveni has said.

Speaking at the Kenya-Uganda Business Forum at the Sarova White Sands Hotel in Mombasa on Wednesday, President Museveni noted that for a long time there had been a clash of views on how countries could get wealthy but the matter was now resolved with the position that it was the private sector to lead this push.

The President is in Kenya on a three-day state visit on the invitation of his host, President Uhuru Kenyatta. The business forum, that brings together key private sector players in the two countries, was held under the theme:  “Strengthening Economic and Trade Partnership”.

After chronicling a clash of ideas dating back to the Egyptian Civilization, through the fall of the Roman Empire and the Renaissance, President Museveni said it was the economist Adam Smith, who in 1776 had offered a clear position to the question, ‘where does the wealth of a nation come from?’

“It is now clear that the private sector are the ones that create wealth. It is also enough to say that in order for a country to create wealth, it must be done through private sector-led growth. Trade is the only way for survival and it cannot be interfered with,” he said.

About the market, the President noted that it was not enough to rely on a country’s internal market but also create opportunities beyond one’s borders.

“That is why some of us speak about integration until we are about to suffer from throat cancer. Uganda has 40 million people, and some still very poor. You must look at the EAC, COMESA and now the Continental Free Trade Area. Without a market, there is no wealth and if there is no wealth, there are no jobs and without jobs there is no stability,” he said.

Citing the case of China, President Museveni noted that even with a big population of over 1.3 billion people, it was only able to become a global economic power after opening up its business space to the outside world in the late 1970s.

On infrastructure, President Museveni said it was critical because it links the producers to the market and facilitates communication.

He thanked the Kenyan government for constructing the Standard Gauge Railway and improving efficiency at Mombasa Port which had seen clearance of goods now completed in seven days down from the previous 21 days.

The President said the construction of the SGR from Mombasa to Nairobi and then to Naivasha and later Malaba to Kampala would greatly reduce the cost of transporting goods and ease doing business.

“I also thank the Kenyan government for building a petroleum products pipeline to Kisumu. We can now load these onto vessels across Lake Victoria and therefore save the use of roads by heavy trucks,” he added.

Uganda, said the President, was investing in more electricity, having just commissioned the 183MW Isimba Dam and would soon launch the 650MW Karuma Dam.

“Never again shall we suffer an electricity deficit. And the cost of electricity will become much cheaper as we launch more dams. However, I must note that the cheap electricity is for manufacturers, tourism and hotels not for discos,” he said.

On the subject of cheap money, President Museveni revealed that the government was capitalizing the Uganda Development Bank so that manufacturers can borrow cheaply.

He also challenged the business community to avoid seeking unnecessary protection from their governments and instead exploit areas where they enjoy comparative advantage to maximize profits.

“Businessmen also need to wake up. I heard that poultry producers in Kenya were seeking for protection from Ugandan competitors. You cannot enslave Kenyans to buy your eggs. Let us encourage use of comparative advantage. For example if must set up a factory that needs huge imported raw materials, then naturally they will locate it in Kenya because of accessibility to the sea,” he said.

President Uhuru Kenyatta urged the business community to ensure their deliberations focused on how to bolster trade between the two countries.

“Uganda and Kenya have the opportunity to be trail blazers in the economy…I and Museveni believe that the future of Africa depends on the inter-trade relations,” he said.

The Chairman for the East African Business Council, Nicholas Nesbitt, called upon the private sector to be pro-active, look for global opportunities and take the Pan-Africanism stand in promoting business.

The Chairman was happy to note that there was a health balance of trade between Kenya and Uganda. He appreciated the role of the government for continuing to work hand in hand with the private sector and called for continued dialogue and participation between the two bodies.

Amos Wekesa, a businessman and CEO of the Great Lakes Safaris Lodges in Uganda, thanked the governments of Uganda Rwanda and Kenya for forming the East African tourist visa but urged them to encourage Tanzania to join.

He also asked for more initiative to exploit trans-boundary tourism, asked governments to reconsider the demand for yellow fever vaccination cards in the region and requested politicians to conduct peaceful elections since businesses suffer if polls turn chaotic.