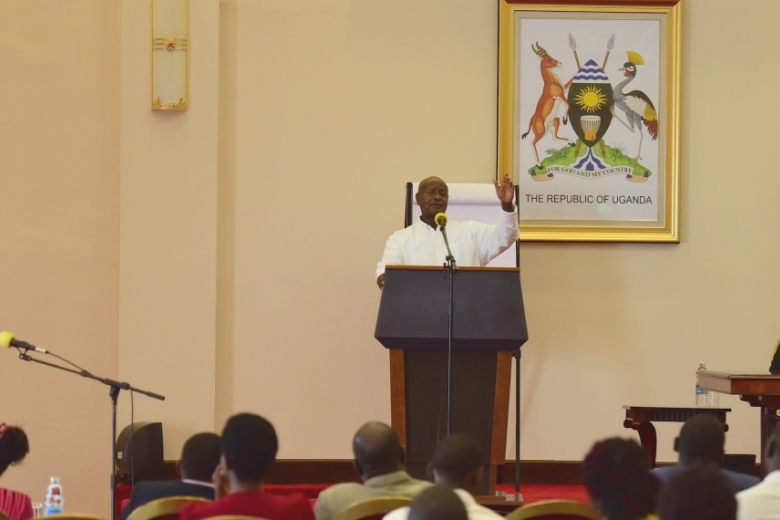 President Yoweri Museveni has said continued underdevelopment and lack of democracy are some of the challenges facing wildlife conservation in Africa.

The President was speaking at a press briefing held at Entebbe State House Entebbe to launch the Uganda Giant’s Conservation and Tourism Investment Forum.  He said for countries to ensure conservation of the environment, there is need to lessen the pressure on national parks by investing more in industries and services.

'If you are to support conservation sustainably, you must help backward countries become modern because this will lessen people putting pressure on national parks,” he said.

The President said having a big population of people in agriculture is a characteristic of backward societies. He noted that developed countries, such as the United States, which is 3 million square miles and a population of over 300 million, has only 2% of that population in agriculture while the rest are in industry and services. He, therefore, stressed the need for organic metamorphosis of societies from peasantry.

The Giant’s Club is an initiative administered by the conservation charity, Space for Giants, and aims to safeguard Africa’s vulnerable elephant populations and the landscapes they need to thrive. Space for Giants confronts acute threats like the ivory trade and long-term challenge like balancing the needs of wildlife and growing human populations.

The founding members of the Giants Club are Presidents Museveni, Uhuru Kenyatta of Kenya, Ali Bongo of Gabon and the Tlhokomela Endangered Wildlife Trust of Botswana with President Ian Khama as its patron.

Uganda will host the Uganda Giant’s Conservation and Tourism Investment Forum on Friday 6th October 2017. The forum aims to attract tourism into Uganda and make it a destination for high end paying clients and secure long-term sources of funding for the protection and maintenance of Uganda’s protected area network.

President Museveni said tourism has distinguished itself as a productive sector with the ability to transform Uganda from a predominantly peasant society to middle income level. He said that the NRM government would ensure that incentives are created for investors as part of the inward investment provided by them under the Public Private Partnership Policy for them to contribute towards conservation programmes where they invest.

“By inviting conservation-motivated investors to help build a ‘nature based economy’, we will rehabilitate and manage Uganda’s network of protected areas while developing economic growth,” he said.

Giant Club Executive Director, Mr. Oliver Pull, thanked the government of Uganda for its commitment to the tourism industry.

“It is important to invest in wildlife because it provides revenue, jobs and high end tourists to Uganda,” he said.