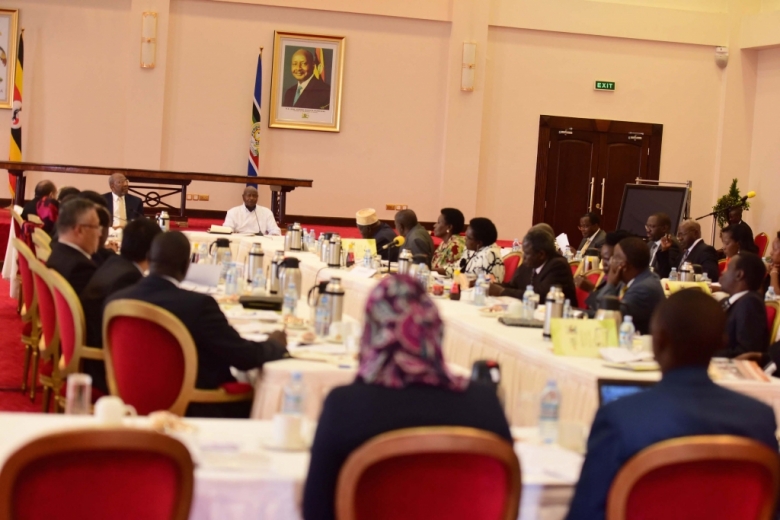 President Yoweri Museveni has said he is optimistic that the economy of Uganda will grow sustainably as government has now got the facts. The President was speaking at the opening and review of the 5th phase of the Presidential Investors’ Round Table (PIRT) that took place this morning at State House, Entebbe.

The 5th phase of PIRT has been working for the past 2 years and is due to conclude its work at the end of this year 2017. The 5th phase of PIRT was launched in August 2015 to make recommendations in the areas of tourism, oil, gas and energy, minerals’ value addition, competitiveness and ease of doing business in the country.

PIRT is an innovation of President Museveni that drives government Ministries, Departments and Agencies to improve service delivery as well as the country’s competitiveness in the global economy.  President Museveni said that after many years of trial and error, we have been able to identify 10 strategic bottlenecks.

“Part of the problem of Africa is that they take a uni-dimension of issues. In the 1960s, if you attended seminars on Africa, they used to talk about rural economic development and later on in the 1970s, they changed to the education and after that women emancipation,” he said.

President Museveni said that the uni-dimensional approach of issues or talk of only one issue for a period of time, comes to nothing. He said that he has since then identified 10 strategic bottlenecks that must be tackled head-on in order to help the economy grow sustainably. He said that most African economies have been crippled by emphasis on politics of identity rather than emphasizing interests. Mr. Museveni added that focusing on identity is a very big mistake and the issue of wrong ideology must be addressed.

“Once you have got the wrong ideology, you cannot build state pillars such as the army because you are thinking of tribes and you end up like Somalia or DRC having to import security from somewhere else,” he said.

He noted that political problems of Uganda’s trade partners have caused the fall in the prices of commodities such as tea, beef and milk.

The President said that the other bottleneck that needs to be addressed is that of infrastructure.

“Underdevelopment of infrastructure means low electricity, high electricity and transport costs and the private sector cannot make profit because of the high cost of inputs,” he said.

Mr. Museveni told the meeting that those critiquing government that the country is producing a lot of electricity should stand warned as he would not compromise and allow that kind of confusion.

“There will be no slow down on electrification. Even when the construction of all these dams is done, we will only have 2000 megawatts,” he said.

He said that he has no problems with investors wanting to invest in the electricity sector as long as the cost does not exceed 5 cents per unit for the manufacturing industry. He added that after addressing the problem of electricity, government is now struggling to tackle the issue of high transport costs by constructing the railway and linking it to the lakes.

“Cargo must move on the railway and water and the roads be left for people. Once we deal with transport, the only dangers remaining will be corruption and delays in decision making,” he said.

President Museveni said that the other bottlenecks that need to be addressed include supporting the private sector and the fragmented market, which was caused by colonialism.

“In the 1970’s, one of our leaders woke up and said he was indigenizing some of the business operated by foreign groups. In economics, we have measurements of GDP and GNP. Much of China’s growth is not from GNP but GDP. If you do not have a big market you cannot grow,” he observed.

He added that when there are low costs of production, such as transport and electricity, many investors will set up industries and help to reduce the population that is stuck in subsistence farming.

“We have a problem of 68% of the population being in subsistence farming. This figure has not been changing in all the past population censuses,” he said.

Prime Minister, Dr. Ruhakana Rugunda, said that PIRT is a dynamic and mature private sector and government engagement that has enabled Uganda to achieve tremendous strides in competitiveness and ease of doing business on the global market. He called for implementation of the decisions taken in the meeting.

The Minister of Finance and Economic Planning, Mr. Matia Kasaija, said that government would put more capital in the Uganda Development Bank to ease trade.