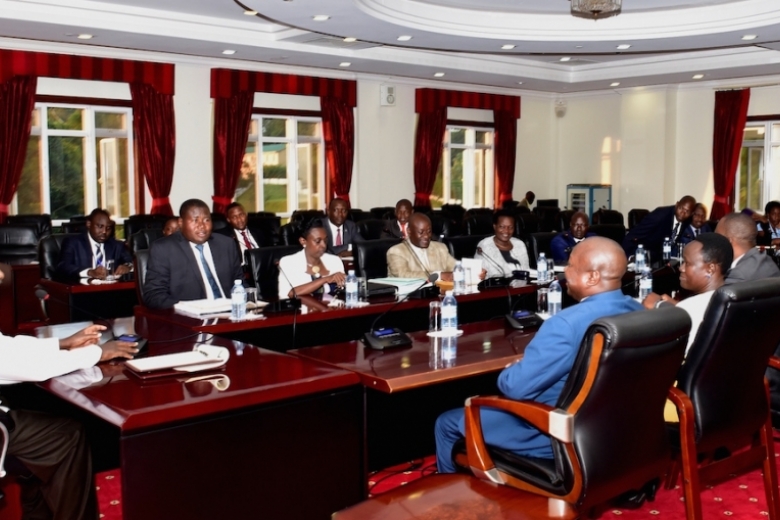 Entebbe. The presence of age limits for any elective office goes against Article 1 of the 1995 Constitution, the bedrock of that supreme law, which says “Power belongs to the people”, President Yoweri Museveni has said.

Since Ugandans are the custodians of the Constitution and their country, the President said, they should be given the ultimate duty of determining how and who should lead them through regular free and fair elections instead of being merely “legalistic”.

“If someone votes, why can’t he be voted for?” President Museveni told Parliament’s Legal Affairs Committee which had called on him Tuesday at State House, Entebbe, to seek his views on the proposed amendment of Article 102(b) of the Constitution.

The committee is scrutinising the private members bill, presented to Parliament by Hon Raphael Magyezi, which seeks to scrap the 35 and 75-year lower and upper age limits for candidates seeking the presidency.

Committee chairman, Hon Oboth Oboth (West Budama South), who led the team of legislators, said they had sought the President’s views as a former presidential candidate and leader of a political party.

He revealed that President Museveni was the last witness to be interviewed by the committee which would then retreat to write its report that will be tabled in Parliament for debate.

At the Tuesday interaction, the MPs asked President Museveni a host of questions surrounding the age limit debate and he comprehensively responded to each of them in a session lasting about two hours.

President Museveni told the committee that Uganda and Africa still face a number of challenges among them being under-developed and backward, and therefore search for leadership in the continent must be tailored to her needs with focus on substance not form.

“In a continent like Africa where we have had a leadership crisis and still faced with many challenges we need to be flexible, not merely legalistic and utilise all the potential from both the young and old. This is because it is more about our safety, survival and prosperity and not who leads us on that journey,” President Museveni said.

Citing cases of the United States, China, Russia and Israel among others, President Museveni explained that many of these countries, in their push to develop and transform, had been guided by leaders who were of advanced age and led the countries for decades.

“Israel has since 1948 been rotating leaders young and old. Today Israel is a super power yet in a largely hostile environment. The great leaders that transformed China, Deng Xiaoping and Deng Yingchao, were of advanced age,” said President Museveni. “The great United Kingdom Prime Minister Winston Churchhill was leader up to the age of 81and offered some of the best leadership to his country.”

President Museveni also cited the case of Tunisia, which in the aftermath of the Arab Spring, had seen 91-year-old Beji Caid Essebsi elected President to stabilise the political situation.

He added: “I think the problem of Africans is concentrating on trivialities yet our issues should be about the African destiny and how to guarantee our future.”

The President also noted that another problem was the “shallowness” of some political actors on the African scene, “who seem to say our interest is to improve curriculum vitae (CVs) of individuals. They want to say ‘eyaliko president’. We are not here to give jobs to people”.

On whether the government would constitute the Constitutional Review Commission to handle a wider raft of proposed amendments, President Museveni said he had instructed the Justice and Constitutional Affairs minister to handle the matter.

The President, however, explained that the NRM party had supported Hon Magyezi’s Bill because he had indicated that time was running out for amendments to do with elections following the Supreme Court’s directive that they must be done within two years after the 2016 ruling.

Asked about what he thought of retirement requirements for civil servants (60 years) and others like judges (70 years) vis-à-vis politicians, the President said the two were radically different.

“Civil servants and judges are about service. They are hired to provide a service. Politics, on the other hand is about representation. Do not mix service with representation. Service is technical,” said the President. “I hire you to be a doctor because you are technical. Politics however is representation. Drunkards will meet in a bar and elect their fellow drunkard to represent them. Representation is about speaking for people, negotiating, lobbying. It is a different form of service from the technical type.”

Commenting on the MPs’ concerns about hostility of the Opposition exhibited during the course of the debate, including violent behaviour, President Museveni said it was because the Opposition had nothing constructive to offer.

“The intolerance is because the opposition are ideologically bankrupt and have nothing to offer. They are desperate because the Movement has revamped the economy and generated revenue and we are able to deliver to the population. They now think that the only way to get rid of the Movement is to do away with particular players,” he noted.

The President also dismissed claims that incumbency gives him an edge over his opponents, saying it instead placed a bigger burden on the candidate as the voters’ expectations are higher.

“Incumbency in a way is a disadvantage. You get blamed all the time,” he said, adding that where incumbents have been unpopular like it was with Kenneth Kaunda in Zambia, Kamuzu Banda in Malawi and several other cases, they have lost elections.

On media reports attributed to him about the performance of leaders above the age of 75, President Museveni said politics is about ideology and service and not sport where one needed to compete physically.

“Politics is not Olympics or rugby where you need to compete physically. The presidency is a guiding role,” he said.

On whether the country should remove age limit and reinstate term limits, the President said at this stage of development, limits were not the most important issue for Uganda because the country has more pressing concerns.

“It took America more than a century and half while developing their economy and political class to put presidential term limits in their constitution. When they finally did so in 1947, everything they wanted had happened. They had developed, the colonies had integrated,” he said. “But here; what has happened? In Africa you behave like we are running countries and yet we are creating countries.”

After taking the MPs through an elaborate history of the American War of Independence, formation of Modern Day America, collapse of Capitalism in 1929 through the Great Depression and the final introduction of presidential term limits in 1947, President Museveni warned Africans against aping everything from the West while ignoring their local conditions and realities.

On the proposal to increase the years of term of office from five to seven years the President said the leaders in Africa have much more to do and need adequate time to develop the continent and saw no harm in having longer terms.

“For these countries with all these problems, two terms of five years is just a joke. Those who talk about this are just looking at improving their CVs. We might not discuss it now but there is merit at looking at the seven years. It would give some time to these young countries to develop. France has seven-year terms, I do not see what they have lost,” said the President.

The President also dismissed the notion that the amendment was tailored to benefit him, pointing out that removal of the 35-year minimum for presidential candidates would instead give room to more young people who had been locked out to have a chance to run for the presidency.

The MPs, through Hon Robinah Rwakoojo, the committee’s deputy chairperson, thanked President Museveni for according them audience, and indicated they would do a good job writing a report that captures all views picked from those they interfaced with.