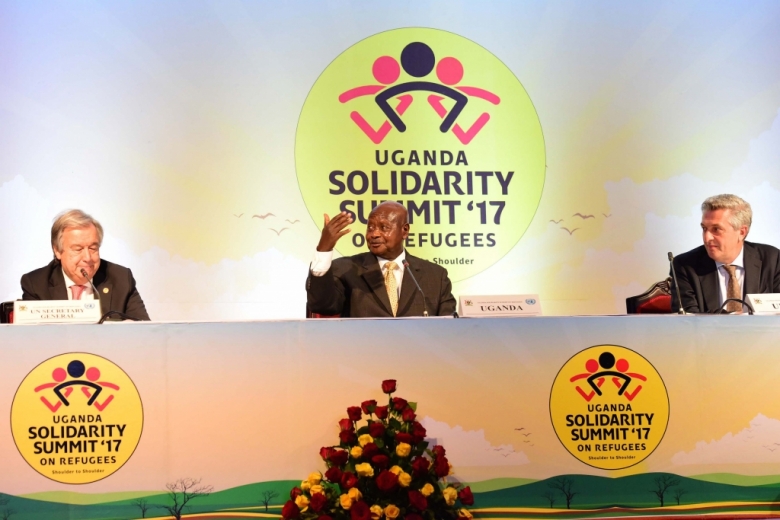 President Yoweri Museveni has appealed to the international community to reward communities that host refugees in terms of infrastructural development. He said that in Uganda the reward would focus on the construction of two main roads – Moyo – Yumbe – Koboko in the Bidibidi Refugee Camp in West Nile Sub-Region and  Kabingo – Rugaaga – Rakai along the famous Nakivale Refugee Camp in South Western Uganda.

“There are certain roads that have become of significance due to the influx of refugees. A murram road is not enough for the increasing number of people. The government would, however, do these roads but the international community should expedite this and show the communities that their hospitality has not been taken for granted,” said Mr. Museveni.

The President was addressing the Uganda Solidarity Summit on Refugees at Speke Resort Munyoyo under the theme ‘Shoulder to Shoulder’. The Summit was co-hosted by President Museveni and the United Nations (UN) Secretary General, Mr. Antonio Guterres.

Uganda is the third country globally and the first in Africa with an influx of 1,271,000 refugees from Eritrea, Ethiopia, Democratic Republic of Congo (DRC), Burundi, Congo, Sudan and Somalia with the biggest percentage of refugees coming from South Sudan at 950,000 people.

President Museveni informed the delegates that the African culture used to be very dynamic on the concept of refugees before the modern times made it static.

“When there was a bad ruler or chief, there was withdrawing of allegiance from the bad ruler which in my language is called okwimuura. People would then pledge allegiance to a new kind of ruler which we call kwohengyera and would become permanent people of the new area,” said Museveni

He further alluded to the past African concept of refugees to the 1797 succession war of Buganda between King Ssemakokiro and JJunju that ended up creating six districts in  East Africa, two of which are in Kenya and Tanzania, as  people fled and permanently settled in areas like Pallisa and Kayunga.

“This was our concept of managing refugees before the colonialists came,” he observed.

The refugees, he added, bring new skills that can be very helpful to the people of the areas that they settled in and reiterated that given the linguistic background of the African continent that comprised of four major groups namely; Niger-Congo, Nilo-Saharan, Afro-Asiatic and Khoi-San, it was not difficult for Africa to co-exist and assimilate the refugees because they are all similar and have linkages.

“The refugees bring new skills. You ask the Americans. A Jew persecuted by Hitler was the one who helped them develop a nuclear bomb. In other countries, you find that if they find that someone has got a skill, they tell them to go back to the resettlement areas. They are denying themselves skills,” he remarked.

The President, however, noted that refugees were currently facing challenges of inadequate food, water, clothes, energy for cooking and good quality education. He emphasized the need for all refugee children to get quality education because it would help them acquire new skills and regain the lost time during the fleeing.

“When the refugees came from Rwanda, some of them were young, like Kagame, but later because of the education, they went back and changed their countries,” he said.

Talking about the issue of conflict resolution between refugees and Ugandan citizens, the President informed the Summit that Uganda has discouraged rural migration of refugees beyond their gazatted resettlement areas due to the sensitive nature of some of the tribes, but that fortunate refugees who have capital and skills, can relocate to the urban centers and participate in the town service works.

Mr. Museveni strongly condemned the refugee crisis saying that it was a man- made crisis that should be put to an end. He added that bad politics, bad ideology that explored politics of identity focusing on tribal and religious sectarianism, rather than interest, were some of the man-made factors that have brought the refugee crisis.

“The leaders of the suffering countries and leaders of opposition have a very big responsibility to end this hemorrhage affecting the poor Africans,” Mr. Museveni reiterated.

In his remarks, the UN Secretary General, Mr. Antonio Guiterres, urged the international community to recognize the efforts that Uganda has made towards the refugee crisis and come together to show solidarity with Uganda as it has shown to the refugees.

“Solidarity is not a matter of generosity; it is a matter of justice. It is essential to recognize these efforts and support Uganda. If the efforts are not sustainable, then it will be dramatic,” Mr. Guterres noted.

He also noted that everything must be done to end the war in South Sudan and appreciated President Museveni for the peace efforts.